According to the researchers, the research represents a significant step toward stable perovskite-based solar cells for next generation solar-to-electricity and solar-to-fuel technologies. 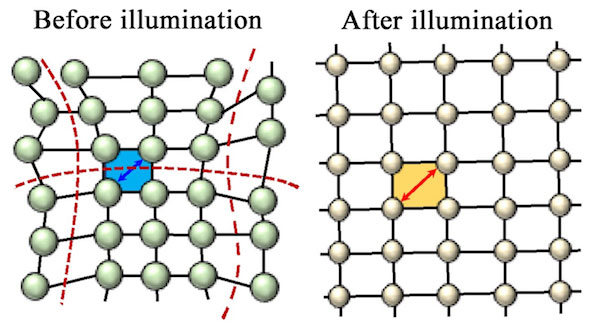 The researchers have discovered that constant illumination relaxes strain in perovskite’s crystal lattice, allowing it to uniformly expand in all directions.

A collaborative research led by Rice University and Los Alamos National Laboratory found that to be the case with a perovskite compound touted as an efficient material to collect sunlight and convert it into energy.

Expansion aligns the material’s crystal planes and cures defects in the bulk. That in turn reduces energetic barriers at the contacts, making it easier for electrons to move through the system and deliver energy to devices.

This not only improves the power conversion efficiency of the solar cell, but also does not compromise its photostability, with negligible degradation over more than 1,500 hours of operation under continuous one-sun illumination of 100 milliwatts per cubic centimeter.

According to the researchers, the research represents a significant step toward stable perovskite-based solar cells for next generation solar-to-electricity and solar-to-fuel technologies.

Commenting on the achievement, Staff Scientist at Los Alamos, Aditya Mohite said, “Hybrid perovskite crystal structures have a general formula of AMX3, where A is a cation, M is a divalent metal and X is a halide.”

“It’s a polar semiconductor with a direct band gap similar to that of gallium arsenide,” Mohite said.

He further said that researchers have long sought efficient hybrid perovskites that are stable in sunlight and under ambient environmental conditions.

“Through this work, we demonstrated significant progress in achieving both of these objectives,” he said.