The company claims that, this new solar panel can deliver up to 380 watt-peak (Wp) power, which makes it the world’s most powerful 60-cell solar panel. 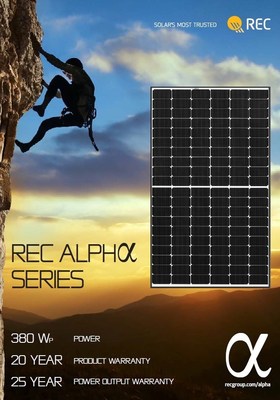 The company claims that, this new solar panel can deliver up to 380 watt-peak (Wp) power, which makes it the world’s most powerful 60-cell solar panel.

Through REC’s new Alpha Series solar modules, the cost of Balance of System (BoS) can be trimmed as they can generate more than 20 per cent extra power with same no. of modules especially where space for panel is restricted such as rooftop.

Moreover, the company’s new Alpha Series solar modules are based on proprietary panel design with revolutionary cell technology, and are already acknowledged by a granted design patent.

Commenting on the new product, REC, CEO, Steve O’Neil said, “At REC, it is the next generation which matters. And we trust in the power of next-generation technology. The Alpha is a completely fresh take on solar power generation. It opens up a big power gap beyond what is commercially available today.”

“By offering such a high value solar panel, REC is again setting new trends, and creating a ‘win-win-win’ opportunity for REC, our partners and solar professionals, as well as home owners and business who want to make a difference for the next generation,” Neil added.

The company said that, with HJT technology it has combined the benefits of crystalline silicon solar cells with thin-film technology for higher efficiency and energy yield, even at higher temperatures.