Home » News » RE Plus Storage is Cost Competitive With new Coal Plants in Tamil Nadu: Report

RE Plus Storage is Cost Competitive With new Coal Plants in Tamil Nadu: Report

A new economic viability analysis reveals that RE along with battery storage in Tamil Nadu is cost-competitive with new coal power plants.

A new economic viability analysis reveals that renewable energy (RE) along with battery storage in Tamil Nadu is cost-competitive with new coal power plants. The report finds the levelised cost of energy (LCOE) for a hypothetical hybrid renewable battery storage system for the state to be Rs 4.97/kWh in 2021, which falls to Rs 3.4/kWh by 2030. In comparison, the cost of electricity produced from new coal power plants in Tamil Nadu is between Rs 4.5 – 6/kWh.

The hybrid system is designed to cater to 1 GW of solar and wind capacity in 2021 with 2 hours of battery backup, which increases step-wise to a 4-hour back up by 2030. 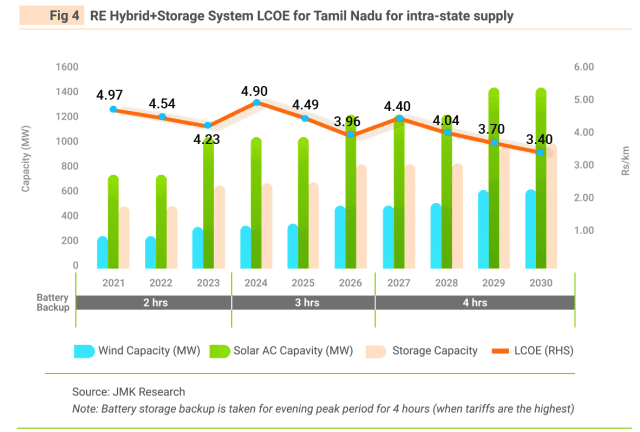 Renewables in APAC to be Cheaper Than Coal by 2030, Led by India
Also Read

The research, by Climate Trends and JMK Research, further highlighted that lithium-ion battery storage systems could also help reduce curtailment of renewable energy. Close to 50 percent of solar power in Tamil Nadu was curtailed since the lockdown in March 2020. Similarly, its curtailment of wind power in 2019 went up to 3.52 hours per day from 1.87 hours per day in 2018.

As per the analysis, the cost of a hybrid renewable battery storage system is at parity with new coal power plants in Tamil Nadu. Moreover, in 10 years’ time, incremental capacity addition would further drive down the cost by over 31 percent.

The analysis tracks the system from an initial capacity of 800 MW of solar and 200 MW of wind along with 500 MWh of storage, which would cater to Tami Nadu’s average annual power demand for 2 hours per day from 2021 – 2023. Its capacity is augmented to 3 hours of daily backup for 2024-2026, and then 4 hours per day for 2027-2030. In the last year, the hybrid system would meet 29 percent of Tamil Nadu’s average annual power demand at a competitive LCOE of Rs 3.4/kWh.

The analysis also puts into perspective that Tamil Nadu has 5 new thermal power projects in its pipeline over the next three years. The Cheyyur ultra mega coal power plant is the biggest of these projects with a tariff of Rs 5 – 6/kWh, which would be 32 percent –  to 43 percent more expensive than the system modelled in the analysis.

Also, if this hypothetical, solar- and wind-powered storage system were to wheel all of its energy to Delhi, even after accounting for ISTS charges it could cover 100 percent of Delhi’s average yearly electricity demand by 2030 at an LCOE of Rs 4.4/kWh.

“The system thus demonstrates that RE coupled with battery storage is a technically and financially viable option to building new coal capacity. At the same time, it would be a dispatchable source of power that addresses the grid integration of intermittent solar and wind power”, said Jyoti Gulia, founder of JMK Research.