A visit to the website of the Punjab State Power Corporation Limited (PSPCL), the state’s primary discom, reveals an interesting offer that has just been released . Promoted as a ‘Golden opportunity to earn lucrative returns by advance payment’ the offer promises a return of 1 percent per month, or 12 percent per annum, for power consumers who place a deposit with the corporation, to be adjusted against their future bills. 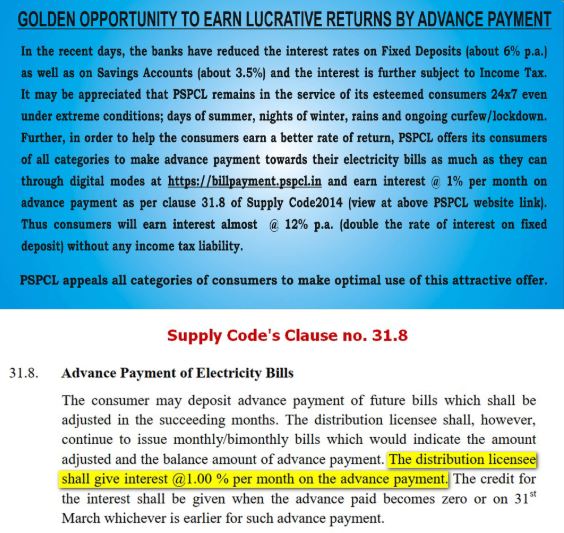 Better Than A Bank?

The offer is not just a shocker because of the massive premium it offers over current bank rates. PSPCL seems to be the only discom in the country with such a generous offer. Coming from a discom that has slipped into losses for some time now, the amazing interest rate for its consumers, seems to be a case of desperation for much needed liquidity. After all, the firm has also gone on record with worries about its abiility to pay regular ‘subsistence’ expenses, and has already made a plea for support from the state government. While it waits for that, making ‘lucrative’ offers seems to have been a last resort to keep the funds flowing. In fact, reports quote PSCL functionary’s saying that for April, only 60 percent of the salaries have been paid to staff, other than those in category C and D, due to funds crunch arising out of reduced demand and poor collections caused by the lockdown.

It’s not like other discoms donot have advance payment offers with some returns for customers. In Delhi itself, TATA-DDL, the discom for NDMC areas  offers a return on deposit that is 0.5 percent over the rate offered by the State Bank of India to its savings bank account holders. That makes it barely 3.5 percent,going by the current SBI rate of a flat 3 percent.

Looking at CESC in Kolkata, another privately owned discom and generator, an interest rate of 6 percent seems to be the rule for now, on a reducing balance basis. Other discoms in Maharashra and other states typically offer a discount ranging from 0.5 percent to 1 percent on total bill for advance payment.

PSPCL’s offer is also a worry because the liquidity issues clearly place the ability of the corporation to clear subsidy amounts for activities like rooftop solar in doubt. Readers will recall that PSPCL had ‘discovered’ a price of Rs 37,000 per Kw for solar recently, which, after MNRE powered subsidies, was coming to just Rs 22,200 for the first Kw. Many vendors we spoke to that time had indicated apprehensions over the low rate, AND the possibility of delays in receipt of subsidies.

The coronavirus lockdown might have provided the corporation the cover it needed for offering outrageously high interest rates, but post lockdown, it will be interesting to see just how many customers take the corporation at its word anymore. Both in terms of the deposits it garners, as well as the response to the rooftop solar scheme. The Power ministry has already stepped in of course, by requesting generation firms to bear with discoms who struggle to make payments caused by lockdown related disruptions for the coming three months.