The latest report issued by the Central Electricity Authority (CEA) has revealed that the total payment dues for the 513 active renewable energy projects in the country, as of July 31, 2019, now amounts to Rs 9735.6 crore. The dues according to the report have increased from Rs 8230 crore for the same period last year.

In its findings, the CEA has also revealed that one one of the renewable developers withdrew its information submitted on August 12, 2019, regarding the payment dues of Rs 1722.5 crore. Accounting for which, the total dues would have been Rs 11458.1 crore. 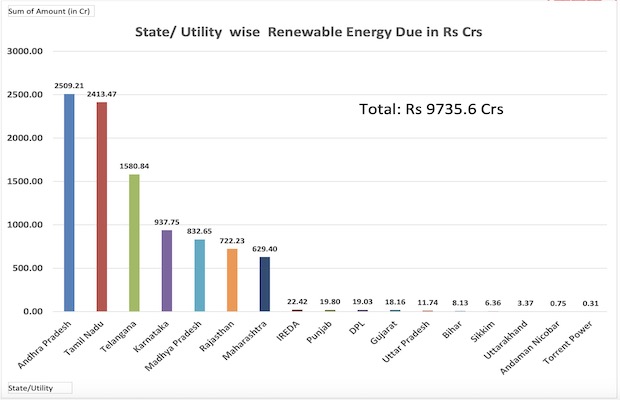 The central agency also reported that three renewable energy generators had amended details of their dues. “So, now there is no amounts pending against the Solar Energy Corporation of India (SECI). Instead, SECI has receivables of Rs 609 crore from Discoms. The details of the same have been included,” it said in the report.

The three states which top the list of defaulters include Andhra Pradesh, Tamil Nadu, and Telangana. Andhra Pradesh has dues totaling Rs 2509.21 crore, followed by Tamil Nadu which has amassed dues worth Rs 2413.47 crore. And in third, Telangana, which has a total of Rs 1580.84 crore. In the case of Andhra Pradesh and Tamil Nadu, the payment of dues have increased by Rs 594 crore, and the two states when combined owe 51 percent of the total dues.

Last month, a report by the CEA had revealed that the power distribution companies (Discoms) across the country owe close to Rs 6872 crore to renewable energy developers in payment dues up to August 16, 2019. And that state discoms in Andhra Pradesh, Telangana, and Karnataka owe renewable energy firms close to 70 percent of the total amount that is due.

And that, Andhra Pradesh with its recent PPA skirmish, which now seems to have taken a fresh turn owes what is nearly 40 percent of the total dues at Rs 2,591 crore.