NTPC plans to achieve 32,000 MW of capacity through renewable energy or 25 percent of its overall power portfolio at the beginning of the next decade. 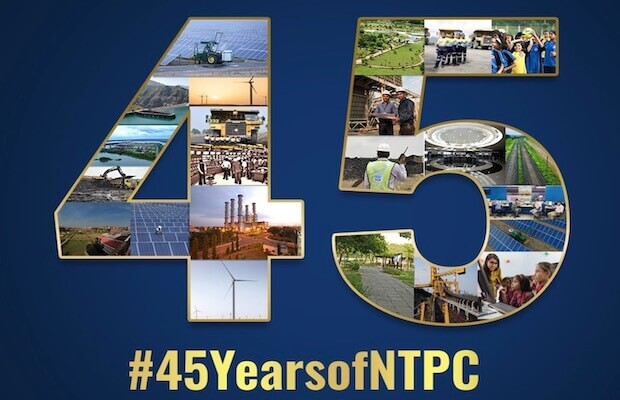 NTPC Ltd, the PSU under the Ministry of Power, recently celebrated its 46th Raising Day completing 45 years of operation and commitment to serve as India’s largest power producer. And the PSU has now reiterated its commitment to nation-building and energising India ahead. From its current power-producing capacity of 62 GW, NTPC plans to become a 130 GW company by the year 2032. In line with the global trend towards renewables, which is a cleaner source of energy, NTPC plans to achieve 32,000 MW of capacity through renewable energy or 25 percent of its overall power portfolio at the beginning of the next decade.

Currently, the firm has 2,404 MW of renewable projects under implementation, out of which 237 MW comes from floating solar projects located in reservoirs at NTPC’s existing stations. In fact, the firms’ Ramagundam 100 MW floating solar plant, being set up under non-PPA mode, is the largest such project in the country.

At the Raising Day Ceremony, RK Singh, Union Minister for Power, New and Renewable Energy, said “NTPC is shaping up well for the future with its diversification plans and as a responsible corporate, NTPC is committed towards environment and the fast-growing capacity addition in the renewable portfolio is testimony to the commitment.”

Further adding that “during the pandemic, NTPC has ensured uninterrupted power supply to the nation reinforcing the significance of affordable power in our daily lives.” He further added, “NTPC is one of the largest companies in India and now they must strive hard to become one of the largest power producers globally. The company has remained nimble-footed that has helped them to evolve stronger over the years.”

The gradual shift towards renewables is one part of NTPC’s commitment towards sustainable power generation and safeguarding the environment. At the same time, NTPC is currently making huge investments towards the deployment of FGD equipment, whereby more than 60 GW capacity has been tendered for FGD for its various coal-based power plants, in order to cut down harmful emissions.

Gurdeep Singh, CMD NTPC, said, “we appreciate and acknowledge all those who have contributed to the growth of NTPC since 1975 and congratulate NTPC family for its success over the years.” He further added “In this financial year, we have added 1784 MW in spite of challenges posed by the pandemic and ensured uninterrupted power supply to the nation. We are planning to achieve the target of 1 lakh MW of capacity by 2025 and are well placed with our diversification plans in distribution and expansion in the renewable portfolio.”