CERC has approved the tariff obtained by NTPC for 3 GW of solar projects for which it had issued the RfS documents during 2015-16.

The Central Electricity Regulatory Commission (CERC) has approved the tariff obtained by NTPC ltd for 3000 MW (3 GW) of solar projects for which it had issued the Request for Selection (RfS) documents during 2015-16. The projects which were tendered during 2015-16 and successfully awarded latest by 2017 under Batch-II of the State Specific Bundling Scheme under National Solar Mission of the Ministry of New and Renewable Energy (MNRE), have already been commissioned.

The projects have been set up in Andhra Pradesh, Karnataka, Rajasthan, Telangana, and Uttar Pradesh, and NTPC as the intermediary procurer has already executed (and is honouring) both Power Purchase Agreements (PPAs) for procurement of power with the Solar Power Developers (SPDs) and Power Sale Agreements (PSAs) with Distribution Licenses (Discoms) for sale of power, all before getting the tariffs approved the CERC as per provisions of the Electricity Act.

NTPC Ltd, only in May 2020, had filed a petition with CERC for the approval of tariffs it obtained for the projects. 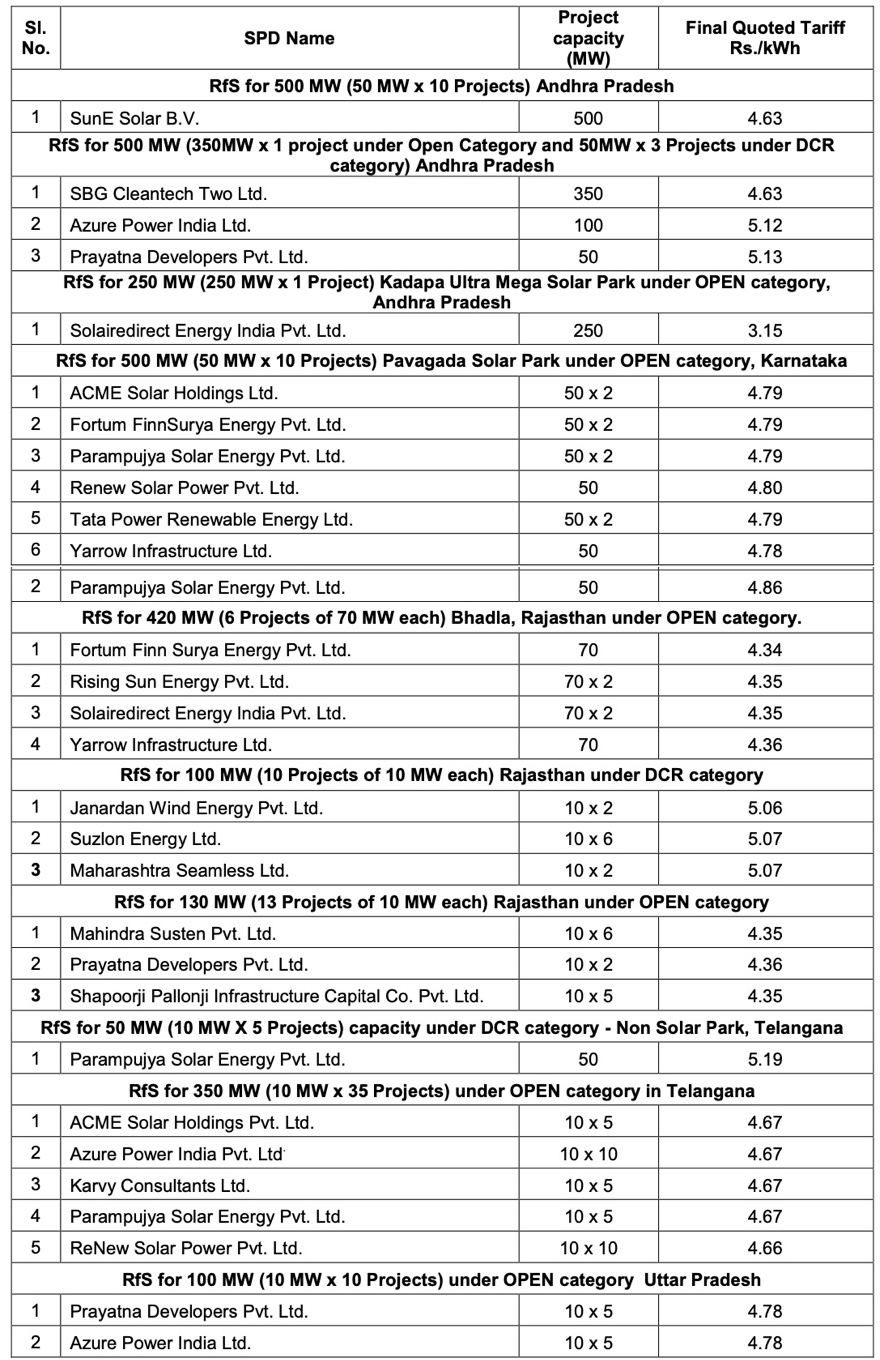 The first phase of the National Solar Mission launched in 2010 provided for a mechanism of ‘bundling’ of then relatively expensive solar power with thermal power (from the unallocated quota of the Government of India as regards power generated at NTPC coal-based generating station), which was relatively cheaper, in the ratio of 2:1 basis (2 MW of solar power with 1 MW of thermal power) for onward sale of the bundled power to the Distribution Licensees at an affordable price.

Accordingly, in terms of the Guidelines dated 10.3.2015, issued to provide necessary policy and operational framework for the development of projects under the ‘State Specific Bundling Scheme’, NTPC in its capacity of intermediary agency, issued Request for Selection (RfS) along with draft Power Purchase Agreement (PPA) and Power Sale Agreement (PSA) documents for setting up of grid-connected solar PV power projects in the States of Andhra Pradesh, Karnataka, Rajasthan, Telangana and Uttar Pradesh for an aggregate capacity of 3000 MW and procurement of solar power from the projects being set-up in relation thereto on various dates from 29.4.2015 to 27.10.2016.

The commission observed that during the entire period, the Petitioner was fully aware of the fact that there was a need for the adoption of tariffs by an Appropriate Commission and that no such adoption has been done by any Commission.

“In our view, the Petitioner has displayed utter negligence and lack of diligence by procuring the power and making the related financial transactions over the years in spite of being fully aware of the fact that the tariff of such power has not been adopted as required under Section 63 of the Electricity Act.”

2. After examining all the submissions made by NTPC, to examine whether the process as per the Guidelines by MNRE for bundling had been followed for arriving at the lowest tariff and for selection of the successful bidders, the commission found that the selection of the successful bidders has been made and the tariff of the projects has been discovered by NTPC through a transparent process of competitive bidding in accordance with Guidelines issued by MNRE.

“Thus, in light of the above, the commission adopts the individual tariff for the power projects as discovered through the competitive bidding process with effect from 26.05.2020, the date on which the instant Petition for the adoption of the tariff was filed. Thus, this tariff shall remain valid with effect from 26.05.2020 till the PPAs signed with the successful bidders remain valid.”