Bloomberg New energy Finance, in its Climatescope survey titled “Emerging Markets Outlook 2019”  has placed India at the top among developing economies. The top ranking in a list of 104 emerging economies will come as reassurance to many investors, both existing and potential, about their plans for the country. India has been followed by Chile, Brazil, China, and Kenya, all countries that have moved ahead based on policies, size or attractive incentives, besides a certain market size of course. 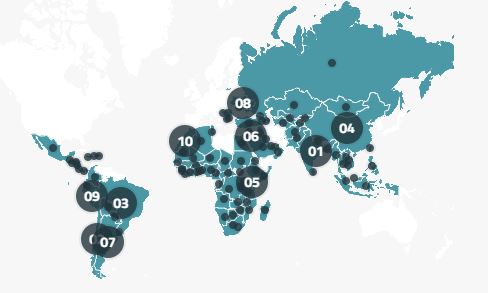 Interestingly, the survey evaluated ability to attract capital for low-carbon energy sources while building a greener economy. With capital as the primary consideration, India’s ranking certainly augurs well for the many ambitious plans being announced afresh this year.

Readers will be aware that after a standout 2017, 2018 and to a large extent 2019, have been disappointing years for renewables, with both solar and wind taking deep hits from policy flip flops, price squeezes, and more ‘normal’ Indian issues like delayed payments. It would appear that the bottom has been reached, and recent moves by the government to shift the momentum towards growth is finally working.

“India’s aggressive policy framework and copious capacity expansions propelled it to first place in 2019, from second in 2018. The Indian market is home to one of the world’s most ambitious renewable energy targets and has held the largest-ever auction for clean power generation,” according to the survey.

According to BNEF, renewables — excluding large hydro — account for 81 GW of India’s 356 GW capacity. “Since 2017, capacity additions from renewables have exceeded those of coal. While wind capacity additions of 2.3 GW in 2018 were 44 per cent below 2017 levels, solar saw its best year to date with 9 GW installed. This included utility-scale, rooftop, and off-grid capacity,” it said. That last number may well be a little disputed, with many other trackers placing the number closer to 8GW or less.

China’s fourth rank, despite being the largest market by a massive margin is no surprise, thanks to the limited opportunities for outside investors to make a dent, plus the slowdown the market witnessed through 2018 and part of 2019.

Tags: Bloomberg NEF, Climatescope 2019, emerging markets outlook 2019, India ranks no1
"Want to be featured here or have news to share? Write to info[at]saurenergy.com