The Light Detection and Ranging (LiDAR) machine was placed 23 km from the coast of Gujarat for a period of 8 months. 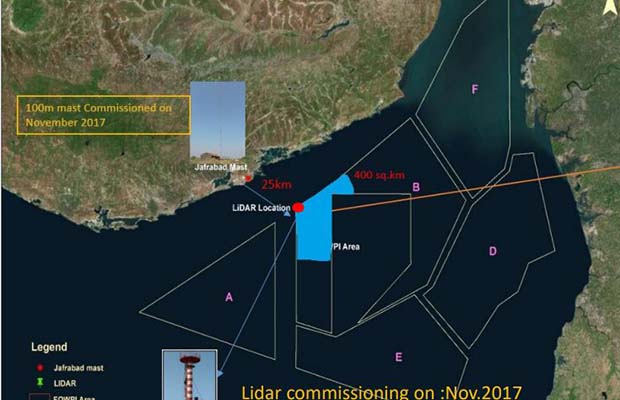 In a bid to tap the most potential source of wind power, National Institute of Wind Energy (NISE) has successfully conducted India’s first LiDAR based wind power test off the Gulf of Khambhat in Gujarat.

The Light Detection and Ranging (LiDAR) machine was placed 23 km from the coast of Gujarat for a period of 8 months.

Previously, as per the researchers, the southern and western tip of the country has been believed to have significant potential of wind speeds that can easily be converted to run power producing turbines.

“Ministry of Renewable Energy and NIWE in association with Facilitating Offshore Wind in India, initiated LiDAR-based measurements to validate the wind potential at the preliminary demarcated zones,” the NIWE report said.

The instrument has appropriately measured the wind speeds within 40-200 meters which would directly be interpreted to decide upon the height of the wind turbine from the surface of water.

Further, the report also mentions that the result was overwhelming as the average maximum wind speed at the lowest height of 40 meters was measured to be 12 m/s which it believes is far more powerful than expected stats.