Saudi Arabia is on its way to achieving its ‘Vision 2030’ goal, which aims at diversifying the Kingdom’s economy away from dependence on oil and towards renewable energy.

In addition to announcing the opening of the ACWA Power-developed Sakaka solar power plant, Saudi Crown Prince Mohammed Bin Salman also revealed that agreements for 7 new solar projects across the country had been signed. Additionally, it appears that the construction of the Dumat Al-Jandal wind energy plant is also nearly complete. All these plants are expected to produce more than 3,600 megawatts energy. “During the past weeks, the Saudi Green Initiative and the Middle East Green Initiative have been announced, which showed that we, as a leading global oil producer, are fully aware of our share of the responsibility in advancing the fight against climate change,” he said.

Energy Minister Prince Abdulaziz bin Salman said the new projects “will contribute to … shifting from liquid fuels consumption to gas and renewable energy, which makes them milestones in the development of the energy sector” and praised the private sector’s “fundamental role” in them. At a launch ceremony in Jouf, he inaugurated the Sakaka plant, which has an output capacity of 300 MW and represents the kingdom’s “first step to utilise renewable energy” according to the Crown Prince. The location, capacity, and investment alliances (5 in number, made up of 12 Saudi and international companies) pertaining to each of the 7 new solar projects are as given below: 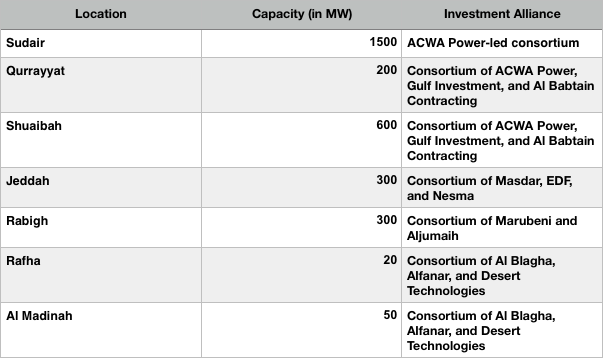 “The completion of these projects, and others, and linking them to the national network, will contribute to strengthening the Kingdom’s capabilities in producing electricity to meet the national need, enhance the reliability of the electrical grid, and support the Kingdom’s ambitious plans to become one of the main countries in the field of producing and exporting electricity using renewable energy,” the energy minister added. In other firms, maintain a strength  in energy exports, even if the oil runs out or loses value .

Saudi Arabia’s Public Investment Fund (PIL), which owns 50% of ACWA, said that the Sudair project would be one of the largest solar power plants in the world and the largest in the Kingdom. Its construction is likely to start in the latter part of 2022 and will likely produce 1500 MW to power 185,000 homes and decrease carbon emissions worth 2.9 tons per year. A consortium supported by the fund signed an agreement with the Saudi Power Procurement Company for 25 years for the project. PIF Governor Yasser Al-Rumayyan expressed his faith in the project by saying that it “embodies our commitment to invest in the sectors that will shape the future of the global economy.”

The biggest project is of course the $500 billion dollar Neom city, planned to be a smart city attractive for tourists and international investment too.

By 2030, the Kingdom plans to produce half of its electricity with gas and the other half with renewables so as to replace about 1 million barrels of oil equivalent of liquid fuels. This would be a welcome outcome since the country is one of the highest emitters of CO2 per capita and the largest consumer of oil for electricity production in the world.