Following the footsteps of various states, the Maharashtra government has also announced an upgrade to its EV policy of 2018, earlier than its previous plans from April 2022. The new policy aims to use the state’s pre-eminent role as a manufacturing centre, as well as provide local support to EV adoption. Valid till March 31, 2025, the new policy has a lot of the old, and many new benefits on offer. Key highlights include:

On the demand side, the state will make it mandatory for all vehicle aggregators, be it ecommerce firms, delivery firms to transition to at least 25 percent EV’s for their urban fleets by 2025. In doing this, the state plays into a trend that is already taking shape on its own actually.

Public transport too is set to play a role, with a target to have 25 percent of public transport fleets running with EV’s, along with last mile delivery in 6 urban areas by 2025.

The state’s bus transport undertaking, Maharashtra State Road Transport Corporation, will also be targeted, to make at least 15 percent of its fleet electric by 2025. 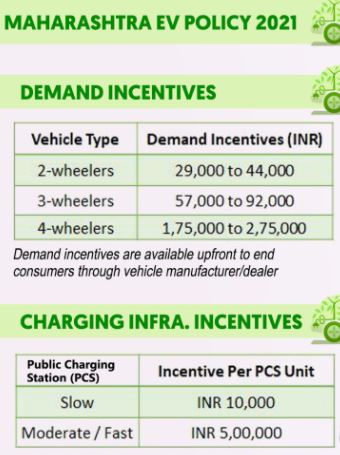 On incentives, the state policy will now offer incentives ranging from a maximum of  of Rs 2,75,000 for 4 wheelers to Rs 5 lacs for chargers.

That means a further drop in EV costs in the state, something that will be welcomes by manufacturers who qualify for the same. All this, even as it indicates that from April 2022, all new government vehicles will be electric vehicles.

The policy stipulates that subsidies will be available for the first 100,000 electric two-wheeler buyers, who are eligible for an incentive of Rs 5,000 per kWh of battery capacity (incentive limit: Rs 10,000; twice the previous cap of Rs 5,000). There is also an early bird incentive of up to Rs 15,000 (for an e-two-wheeler with a 3 kWh battery) for those who purchase the two-wheeler before 31 December, 2021. This means provided the chosen e-two-wheeler has a battery capacity of close to 3 kWh, buyers will be eligible for a total benefit of Rs 25,000 this year. That comfortably makes the state policy the most lucrative for buyers in 2021.

It’s the same story for 4 wheelers or cars, with a per KW subsidy of Rs 5000, applicable for capacity till 30 Kw. That translates to a total incentive of Rs 1.5 lakh (Rs 50,000 higher than the previous limit). An early bird incentive here too edges the state ahead of its nearest competitors, with an additional incentive of up to Rs 1 lakh for those buying before December 31, 2021.

Keep in mind that the state has to compete with the big consumption centre that is Delhi, besides neighbouring Gujarat. These early bird incentives effectively take Maharashtra ahead of both these.

Finally, there is a Rs 7,000 scrappage incentive to nudge people to upgrade to an EV faster.

The new policy will be welcomed by industry, and consumers we suspect, as the case for EV’s becomes ever stronger with the all time high fuel prices.