Generic Renewable Energy Tariffs, which, until now declared by the respective state regulatory commissions have just entered into a new era of market determined mechanism, starting with Maharashtra.

In its Generic Renewable Energy Tariff order for FY 2020-21 under MERC (Renewable Energy Tariff) Regulations, 2019 act, MERC (Maharashtra Electricity Regulatory Commission) has declared that projects shall invariably be determined through a transparent process of competitive bidding in accordance with the Guidelines issued by the Central Government under Section 63 of the Act.

Thus, for all the RE Technologies below, the Commission will not be determining the Generic Tariff and will only adopt the tariff discovered through transparent competitive bidding process as has been specified in the RE tariff Regulations, 2019.

Renewable energy categories covered under the new act include

Under the new rules, the scope for determination of tariffs by the MERC is limited to notification of the generic tariff for Solar Roof-top PV and determination of variable charge for Biomass and non-fossil fuel-based Co-generation Projects.  Even in the latter case, the new tariffs will not include biomass and Non-fossil fuel-based Co-generation Projects, whose tariff has been determined through the competitive bidding process and adopted by the Commission.

For projects below the threshold level of competitive bidding , the commission outlined the process it will follow to determine the same, as per the act.

Under rule 7.3,  the tariff for RE Power Projects below threshold limit of eligibility for participating in Competitive Bidding shall be considered equal to the following cases, in order of priority:

a) Latest Tariff discovered through Competitive Bidding by concerned Distribution Licensee for similar RE project and adopted by the appropriate Commission;

b) The Tariff discovered through Competitive Bidding for similar RE project by Other Distribution Licensee(s) in the State and adopted by the appropriate Commission;

c) The Tariff discovered through Competitive Bidding for similar RE project in the Country and adopted by the appropriate Commission.”

Thus, paving the way for a much higher level of uniformity in tariffs across the country when it comes to smaller projects too.

On small rooftop solar, the commission noted that distribution licensees had not discovered any tariff through competitive bidding. Plus, most of such production was for internal use, with negligible amounts for selling back to the distribution licensee. Accordingly,  the Commission deemed  it fit to use latest tariff rate discovered for Grid Scale Solar project as a Generic Tariff for procurement of surplus energy from Rooftop PV projects.

The Commission notes that in its Order dated 4 December, 2019 in Case No. 292 of 2019 has adopted rate of Rs. 2.83/kWh for Grid Scale Solar Project. Accordingly, the Commission has notified Rs. 2.83/kWh as a Generic Tariff rate for procurement of surplus power at the end of Financial year from Rooftop-PV projects for FY 2020-21.

It is mandatory upon Distribution Licensees to procure such surplus power at the end of financial year which would in any case be counted for meeting its Solar RPO. (Renewable Purchase Obligation)

On APPC or Average Purchase Price Cost  for 2020-21, the commission has arrived at the following rates. 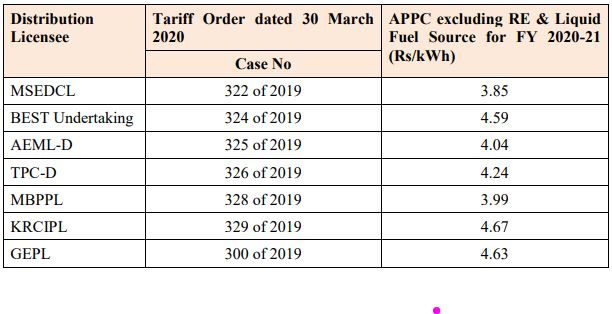 MERC notes that the APPC rate mentioned in last column of the above table shall be used by Distribution Licensee for entering into an EPA with Rooftop PV under Net-billing arrangement for project commissioned in FY 2020-21. Further such rate will be constant for entire period of EPA.