The solar grid cost Kurla residents Rs14 lakh, but they expect to recover the expenses over the next four-and-half years, said members of Green Power Projects Pvt Ltd that installed the project. 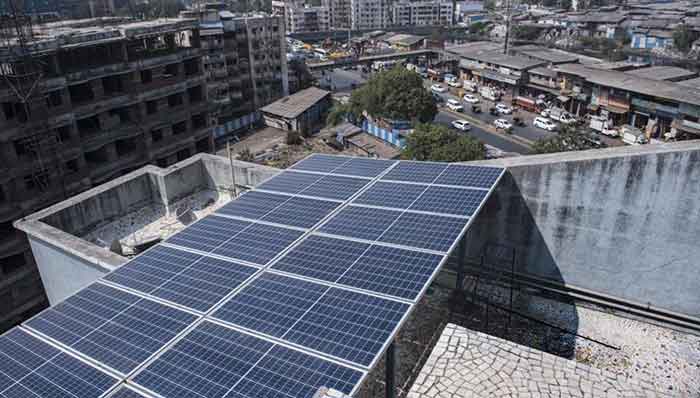 Mumbai’s housing society in Kural has switched to solar power to cut their electricity bill by 83 percent.

Solar system installed in the first week of December, helps the society save Rs26,000 per month in electricity expenses. Their electricity bill before the installation was Rs31,000 and it has now dropped to around Rs5,000, said residents. The plant generates 90% of the energy needed to light up the common areas, parking spaces and operates the lifts and water pumps.

Hanif Shaikh, secretary of the society, “We observed that in the past couple of years many societies in Mumbai opted for solar power and the government stressed on it too. Since it is a cost-effective solution to electricity requirements, and also helps small societies like ours to do something good for the environment, we decided to install this system.”

The solar rooftop carbon calculator prepared by the Ministry of New and Renewable Energy, a 20 kWh system can prevent more than 615 tonnes of carbon emissions over 10 years. It will require 984 teak trees to capture this amount of carbon released by conventional sources of electricity like coal or oil.

The solar grid cost Kurla residents Rs14 lakh, but they expect to recover the expenses over the next four-and-half years, said members of Green Power Projects Pvt Ltd that installed the project.

Muhammad Sohail Shaikh, chief operating officer, Green Power, “While a number of societies, religious and educational institutions in the city have adopted solar energy, installation of such a facility in this area says that societies, big or small, are becoming environmentally conscious.”

He added that a net-metering system was installed with the solar setup, which allows surplus power generated to be exported back to the grid and any deficiency to be imported. At the end of a financial year, the society will be charged by the power supplier only for the ‘net usage’.

Samdani Shaikh, chairman of the society, “It is has been a massive expenditure for us but we know that the effort will go a long way in securing a green future for us. Once we start saving from this project, we will initiate composting and rainwater harvesting as well.”

LS Vhatkar, deputy municipal commissioner (environment), BMC said, “The efforts made by the residents of the Kurla society are praiseworthy. The BMC has directed developers to install solar panels during the construction of all new buildings in the city, and sanctioned it as a part of the city’s development plans. If large societies can adopt it, power from the grid can be channelled to those areas where electricity is undersupplied.”