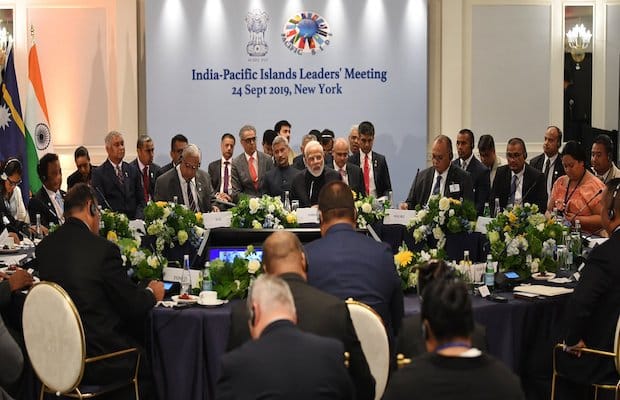 Prime Minister Narendra Modi has announced a USD 150 million line of credit (LOC) to the group of Pacific island nations for undertaking solar, renewable energy and climate-related projects based on their requirement.

Modi, who attended the India-Pacific Islands Developing States (PSIDS) Leaders’ Meeting, also announced a total allocation of USD 12 million to the member states towards implementation of high impact developmental project in the area of their choice.

The meeting was held on the sidelines of the 74th session of the UN General Assembly. This is the first time that Modi has met the leaders of the PSIDS on the margins of UNGA in a plurilateral format.

“In New York, I had the opportunity to meet leaders of the Pacific Islands and interact with them on ways to boost cooperation between our nations. Pacific Islands are at the core of our Act East Policy. Issues like climate change and disaster management were discussed,” Prime Minister Modi tweeted.

“In the spirit of his fundamental Mantra “Sabka Saath, Sabka Vikas aur Sabka Vishwas (together with all, for the development of all and with the trust of all),” Modi announced allocation of 12 million dollars grant (1 million dollar to each PSIDS) towards implementation of high impact developmental project in the area of their choice.

In addition, a concessional Line of Credit of USD 150 million which can be availed by the PSIDS for undertaking solar, renewable energy and climate-related projects based on each country’s requirement was also announced.

Modi emphasised that India and the PSIDS have shared values and a shared future and he highlighted the need for development policies to be inclusive and sustainable to reduce inequality and contribute to empowerment and improvement of the quality of people’s lives.

Modi underlined the reality of climate change and called for increasing the share of renewable energy in the total energy mix to mitigate many adverse effects of climate change. He also expressed India’s readiness to share its experiences in developing alternate energy. He expressed his satisfaction as many countries from the region have joined the International Solar Alliance and invited others to join this initiative.