Maruti Suzuki India Limited has commissioned a 5 MW carport style solar power plant in Gurugram, with an investment of more than Rs 20 crore 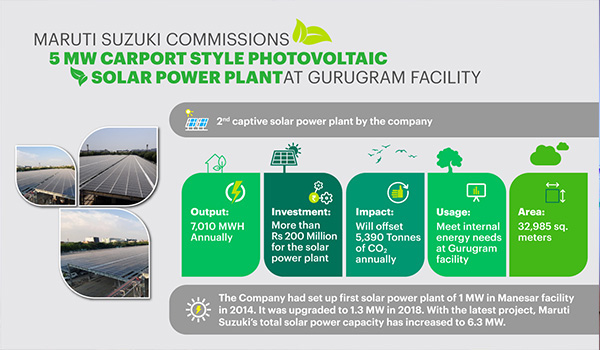 Maruti Suzuki India Limited has announced that it has strengthened its commitment towards a greener future by advancing its efforts in creating sustainable manufacturing with the commissioning of a 5 MW carport style photovoltaic solar power plant in Gurugram. With an investment of more than Rs 20 crore, the solar power project will offset 5,390 tonnes of CO2 emissions annually, for the next 25 years. Additionally, it will give an output of 7,010 MWh of power annually.

Harnessing solar power has been a constant endeavour for Maruti Suzuki, the firm stated. The Company had set up its first solar power plant of 1 MW at the Manesar facility in 2014, which was further upgraded to 1.3 MW in 2018. With the latest project, Maruti Suzuki’s total solar power capacity has increased to 6.3 MW.

Talking about the Company’s green initiatives, Kenichi Ayukawa, Managing Director & CEO, Maruti Suzuki India Limited, said, “we are committed to enhancing sustainable manufacturing and to achieve self-sufficiency in many of our functions. The new solar power plant will complement our efforts to adopt environment-friendly technologies and lower the carbon footprint. We are consistently exploring new ways to harness the abundantly available clean resources and implement them in our business operations.”

The 5 MW solar power plant will cater to the internal energy requirements of the Gurugram facility by synchronising with the captive power plant. As a unique feature of this state-of-the-art plant, photovoltaic solar panels of the power plant will also work as a roof for the newly constructed car parking area. So while generating clean energy, it will also enhance the safety of the new cars parked underneath, from harsh climatic conditions.

In November 2018m, we had reported that Fourth Partner Energy, one of India’s leading distributed solar energy company has commissioned a 980-kWp carport for ŠKODA AUTO India Private Ltd. at their manufacturing facility in Aurangabad, Maharashtra. This initiative, built-in line with the ‘GREEN FUTURE’ strategy of ŠKODA AUTO and commissioned as part of the ‘INDIA 2.0’ project, is expected to reduce 922 tons of carbon dioxide emissions each year.

Interestingly, Maruti has refused to disclose the name of the vendor and equipment specs for their solar carport.