LG Chem will split its battery business to create a new enterprise that will focus solely on battery technology and related operations.

LG Chem has announced that it will split its battery business from the rest of its operations to create a new enterprise that will focus solely on the battery technology and related operations. The firm announced that in its recent board meeting the corporate spin-off plan to raise the corporate value and stockholder value of the battery business by concentrating on the business area of expertise was resolved.

Accordingly, LG Chem plans to receive approval from the extraordinary meeting of stockholders on October 30, 2020, and officially launch ‘LG Energy Solution’ as a new corporation exclusively in charge of the battery business from December 1, 2020. This will be a physical division in which LG Chem will possess all of the stocks issued by the new battery corporation and LG Chem will possess 100 percent of the non-listed shares of the new corporation.

Regarding this corporate spin-off, the firm issued, “we came to the judgment that this is the right time for the corporate spin-off as the battery industry is growing rapidly and structural profits in the EV battery sector are being made in earnest.”

And added, “The corporate spin-off will make it possible to focus on the specialised business areas and enhance management efficiency, thereby upgrading corporate value and stockholder value.”

Regarding the physical division method that will be used, it was stated, “Improved corporate value through the growth of the new corporation will also have a positive impact on the mother company, and we also considered the advantages from the synergy effects of the two companies such as R&D cooperation as well as the association of battery materials businesses such as anode materials.

Regarding the IPO (initial public offering) of the new corporation, it stated that “Nothing is confirmed as of now and we plan to continuously review it in the future.” It added, “Cash generated from business activities will be used as the facility investment funds according to the increase of EV demands and since LG Chem possesses 100 percent of the shares, it will be possible to procure the funds using various methods.” 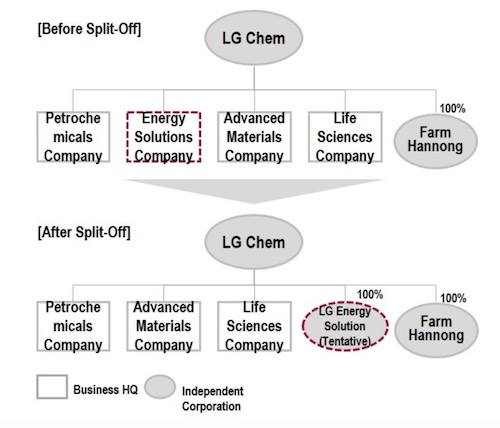 Furthermore, it has currently procured more than 150 trillion KRW in orders on hand in the EV battery business and it is investing over 3 trillion KRW annually in facilities, and therefore, the need to procure large investment funds in a timely fashion has also increased. Through this division, it will be possible to attract large investments, while easing financial burdens by establishing an independent financial structure system for each business sector.

Another reason for this division is the need for prompt decision-making to respond to the rapidly changing market, as well as the rising need for flexible organisational operation.