In the recent SECI auction, India set a new record low solar tariff of Rs 2/kWh, IEEFA takes a look at the key factors behind it.

In the recent Solar Energy Corporation of India (SECI) auction which was concluded on November 23, 2020, India set a new record low tariff for solar projects at Rs 2/kWh. And in its new analysis, the Institute of Energy Economics and Financial Analysis (IEEFA) takes a look at the key factors behind the record low solar tariff.

The tariff-based bidding was conducted for the selection of solar power developers to set up 1,070 megawatts (MW) of grid-connected solar PV projects on a “build-own-operate” (BOO) basis in Rajasthan (Tranche-III). With 14 developers participating, the tender was oversubscribed by 3,280 MW, attracting a total of 4,350 MW of bids. Saudi Arabia-based Aljomaih Energy and Water Co. and Sembcorp Energy’s India arm Green Infra Wind Energy Ltd. were the lowest (L1) bidders with a tariff of Rs2/kWh for 200 MW and 400 MW capacities respectively. State-owned NTPC Ltd won the contract for the remaining 470 MW capacity with the second-lowest (L2) bid of Rs 2.01/kWh. 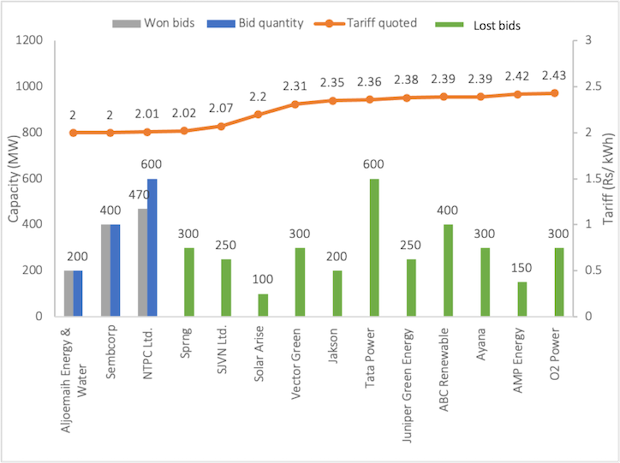 According to IEEFA, the key factors include access to low-cost financing at 7-7.5 percent for government entities like NTPC and for international developers able to arbitrage multi-decade, record-low OECD interest rates (even adjusting for a significant combined currency and country risk premium for India). And the expectation that mono PERC module prices will fall 10-15 percent to reach USc19-20/Wp (watt peak) by 2022 (excluding duties and taxes).

In addition to that, the authors of the briefing note also believe that in addition to low-cost financing and module price deflation, there is another factor facilitating the tariff of Rs 2/kWh. The adoption of bifacial modules with single-axis trackers increases the capacity utilisation factor (CUF) by 4 percent to 23 percent, which leads to a higher generation. However, lenders in India are reluctant to fund this technology without a project history or previous track record, despite its rapid adoption and use in various other countries including the UAE.

It goes on to add that the power purchase assurance – with the Power Sale Agreement (PSA) between the intermediary procurer SECI and the buying entity already signed – provides confidence to developers and minimises the off-taker risk. Power procured by SECI has been provisioned to be sold to Rajasthan Urja Vikas Nigam Limited (RUVNL). Another contributing factor may be that modules for this specific tender will be exempt from safeguard duty (SGD) and basic custom duties (BCD).

Though able to be justified by the returns, there are many significant risks that a large scale solar project faces that must be accounted for. And one of those risks is the kind of impact the new low tariff will have on Discoms. Which will most likely treat it as a new benchmark, and could thus further delay the signing of PSAs of previously awarded but yet-to-be signed renewable projects between Discoms and SECI. Furthermore, project quality might also be impacted or compromised by such aggressive tariffs.

The authors end by stating that time alone will tell whether a Rs 2/kWh tariff is viable but clearly, the bidding has demonstrated investor confidence in the Indian solar sector even amidst the pandemic. It sets yet another tough benchmark for the whole industry but also highlights the cost reduction opportunities for India as the country builds a more sustainable, more domestic-based energy system in its drive towards zero emissions electrification of the economy.