Jolywood and Shanghai Electric have announced the signing of a landmark cooperation deal to construct a 320MW capacity power project. 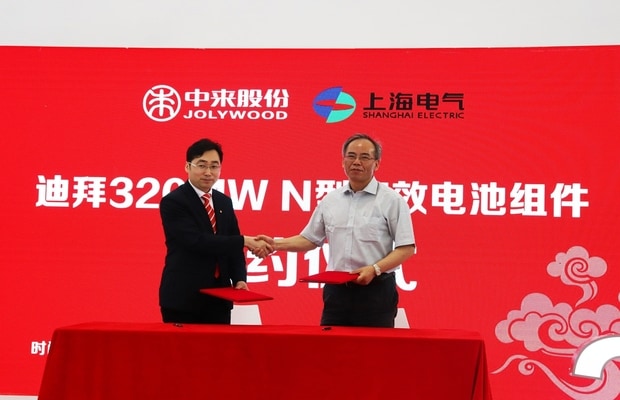 Jolywood, a leading Chinese manufacturer of N-type bifacial solar cells and modules, and Shanghai Electric have announced the signing of a landmark cooperation deal to construct a 320MW capacity power station to deliver clean and renewable energy to Dubai Expo in 2020.

“Jolywood is striving to revolutionise the photovoltaic industry with the global supply of N-type bifacial technology. Through joint efforts, we aim to take the development of renewable energy to another level by setting a new benchmark for the industry,” said Weijian Lin, Chairman of Jolywood Group. “Looking forward, Jolywood will continue to bring renewable energy to the world as part of China’sBelt and Road initiative.”

Xiaobin Cao, Deputy General Manager of Shanghai Electric, noted that the contribution Jolywood brings to the project will be significant, praising that high-quality of Jolywood‘s bifacial modules. “Its unique N-type high-efficiency technology equips the modules with lower degradation and better temperature coefficient making them suitable for use in the Middle East while providing a more stable, clean and sustainable electric power,” he said.

The company is due to complete its delivery of the modules in two stages scheduled for the second half of 2020 and the beginning of 2022, respectively. As the largest overseas N-type bifacial power plant project for Jolywood, it marks a significant milestone for the manufacturer and builds on the past success of last year’s SPIC’s 100MW Sihong TopRunner project.

A batch of 12 new M2-sized cells (244.3 cm²) measured at Germany’s Institute for Solar Energy Research (ISFH) CalTec showed an average conversion efficiency of 23.0 percent, with the best cell topping 23.2 percent. While the research centres own measurements revealed a bifaciality above 80 percent.