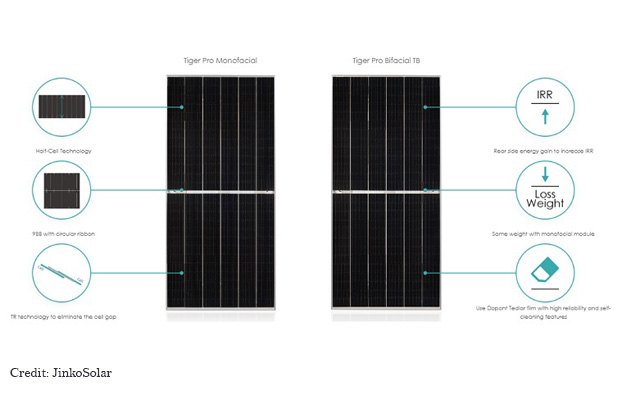 The Shanghai-headquartered company’s latest module series can generate a maximum power output of up to 580Wp, which is 40 percent higher as compared to current mainstream products installed in the utility-scale projects. This series displays multiple solar power efficiency innovations across 3 flagship model.

The company used an innovative multi-wire 9BB and TR tiling ribbon technology in all these high energy density modules to reach significantly improved performance with conversion efficiency up to 21.6 percent.

Commenting on the launch of Tiger Pro series, Kangping Chen, Chief Executive Officer of JinkoSolar, said that “we’ve made an enormous leap into the high-efficiency era by introducing industry-leading and more competitive products. The global PV market is rapidly moving towards high-performance modules to reduce system costs and initial upfront capital investment, so it was time to consolidate our competitiveness by leveraging our ability to rapidly begin mass-producing cutting-edge products.”

Some of the other advantages of JinkoSolar’s newly launched Tiger Pro module series include lower power attenuation rate (at 2 percent for the first year) and better open-circuit voltage.

The company in a statement said that by greatly reducing LCOE compared to traditional modules, the high-efficiency Tiger Pro module series paves the way for investors to generate higher power output.

“We always modify our designs based on customer feedback and market response because designing high-efficiency products in the lab is one thing, but ramping up to mass production drives the entire industry forward together towards grid parity,” said Chen.

Chen further added “with various types of modules, Tiger Pro series enables the construction of more powerful and efficient solar power farms that will bring a higher return on investment for projects with larger technical and efficiency requirements. It is expected to lead the next generation of industry standards and drive the PV industry developing into a new chapter.”

Meanwhile, the company is planning to commence mass production of the new module series in the Q3 of 2020.

In April this year, the company’s Australian arm, JinkoSolar Australia, entered into a one-year AUD 37 million line of credit agreement with the National Australia Bank (NAB), one of the four largest financial institutions in Australia.