JinkoSolar has revealed that its cheetah size cells and N-type cells reached 24.38% and 24.58% efficiency, respectively, and its 72-monocrystalline module reached 469.3W output. 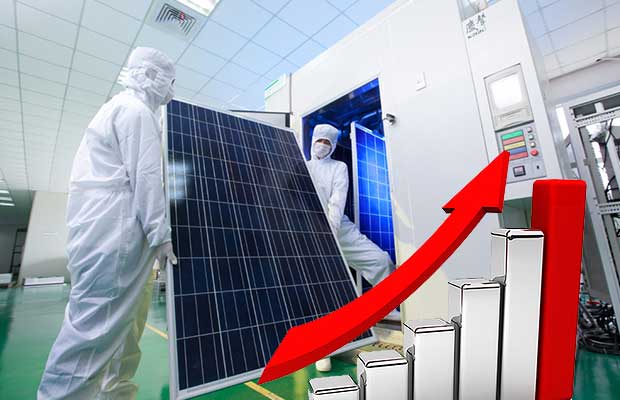 JinkoSolar, one of the largest solar module manufacturers in the world, has announced that the maximum conversion efficiency of its cheetah size cells and N-type cells reached 24.38% and 24.58%, respectively, during testing conducted by the Chinese Academy of Sciences in March 2019.

Additionally, the company has also revealed that the power generated by its 72 version high-efficiency monocrystalline module reached 469.3W during testing conducted by TÜV Rheinland, a respected third-party institution, in May 2019.

“JinkoSolar’s production chain, including R&D teams from silicon wafers, solar cells and solar modules, all made significant technological breakthroughs which were key to the extremely high solar cell efficiency and module power output,” the company issued in a statement.

“With our commitment to revolutionise the industry using technological innovation, JinkoSolar has been continuously breaking world records for the efficiency of solar cells and modules,” commented Dr. Hao Jin, JinkoSolar R&D Vice President. “To complement our efforts in continuously upgrading product technology and create more value for our global customers, JinkoSolar has established a joint research platform with many advanced R&D institutions across the globe.”

In May, the Chinese manufacturer launched its latest addition to its range of premium Cheetah products, the “Swan” bifacial module with new DuPont Clear DuPont Tedlar-based backsheet. By combining high-efficiency mono PERC Cheetah bifacial cells and clear DuPont Tedlar film for backsheets, the Swan modules can achieve a power output of up to 400W on the front side and up to 20% energy gain from the rear side.

“JinkoSolar and DuPont share a common philosophy of excellence, quality and innovation, and strive to promote the continuous improvement of solar panel power output and durability,” Frank Niendorf, General Manager Europe, JinkoSolar said at the time. “We look forward to further diversifying our global product portfolio by including a new bifacial module with DuPont’s Clear DuPont Tedlar film. By this, we will offer another competitive value proposition with long-term field-proven performance, research and innovation capabilities to our customers worldwide. We are honoured to be able to further promote sustainable development in the solar industry together with a reliable partner like DuPont.”