The Ministry of Information & Broadcasting said in a notification that, with this partnership, the Government of India continues to be an active participant in the country’s quest for reduced emissions & vehicular electrification. 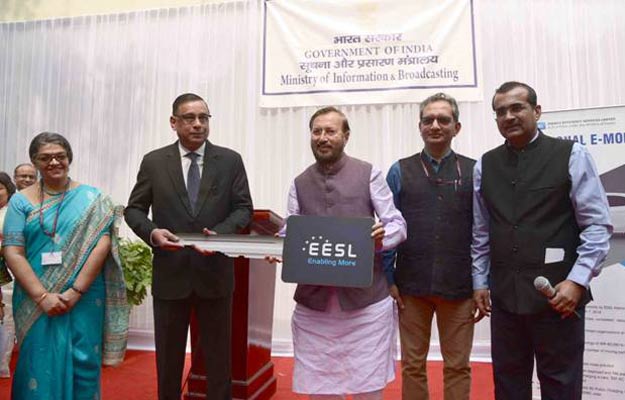 In order to provide further boost to e-mobility in the country, Environment and Information & Broadcasting (I&B) Minister Prakash Javadekar on Friday flagged off electric vehicles (e-vehicles), which were procured from EESL by the government.

The Ministry of Information & Broadcasting said in a notification that, with this partnership, the Government of India continues to be an active participant in the country’s quest for reduced emissions & vehicular electrification.

While stating the benefits of using e-vehicles at the event in New Delhi, Prakash Javadekar said “e-cars are an attractive, sustainable and profitable solution to mitigate climate change and the risk of public health caused by vehicular emission.”

The ministry further added that, “EESL has aggregated demand by procuring electric vehicles in bulk to get economies of scale.”

EESL provides EVs to the government entities on lease/outright purchase basis, in order to replace the existing petrol and diesel vehicles taken on lease by a number of government organisations.

The government is likely to replace the present leased vehicles in various organizations with EESL’s e-vehicles. For this, EESL will charge 90 percent of the current lease rent, which the various government organisations are paying to their vendors. So, it will save the cost to the government.

The lease rental period will be for 5-6 years and during this period maintenance will be provided by the EESL itself.

EESL has completed procurement of 10,000 e-cars, which are being provided to various government entities on lease/outright purchase basis. Currently, 1,510 electric cars have been deployed/under registration.