IRENA Pushes for Bigger NDCs in 2020

In a sensible reminder of how the ground situation has changed to open up new facilities, IRENA’s (International Renewable Energy Agency) call for higher ambition on NDC’s should be heeded.

Making a strong case for the new NDC round discussions starting in 2020, IRENA has put forward the case based on a simple fact. That existing NDC provisions are inadequate to control climate change as envisaged. Combine this with the fact of the sharp drop in renewable energy costs, and improvement in efficiency, and you have a real strong case to relook at the numbers planned for renewable energy.

IRENA says that more extensive renewable power deployment, amounting to 7.7 TW (or 3.3 times current global capacity), could be achieved cost-effectively and would bring considerable socio-economic benefits. Further, existing NDC power targets overlook 59% of the potential for renewable electricity deployment in line with the Paris Agreement by 2030, according to IRENA’s REmap analysis. 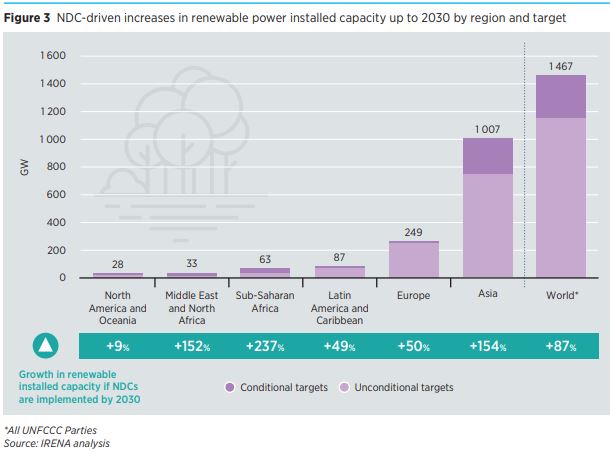 Current NDC power targets fall increasingly short of national strategies and plans. Aligning the next round of NDCs closely to those real-world targets could increase global renewable power capacity to 5.2 TW (or 2.2 times current global capacity) by 2030.

To date, only 85 countries included unconditional renewable power pledges in their current NDCs – compared to 135 with non-NDC domestic renewable power targets (either national or sub-national).

NDCs thus far do not reflect the actual growth of renewable power, with global capacity growing by 8.6% per year since 2015.

Implementing current NDCs would only translate into annual capacity growth of 4% for 2015–2030, even though annual renewable power growth already averaged 5.9% in 2010–2014. With current deployment trends, the 3.2 TW foreseen in current NDC power targets for 2030 could be reached by 2022.

Power sector decarbonisation alone will not suffice to meet Paris Agreement objectives. Rather, the entire energy sector must undergo a profound transformation through the adoption of renewables and energy efficiency measures, as well as increased electrification of end uses.