Indian Renewable Energy Development Agency (IREDA) has signed a Memorandum of Understanding (MoU) with the Ministry of New and Renewable Energy (MNRE) on 2 November 2020 and set a revenue target of Rs 2,406 crore for 2020-21. The exercise is a standard practice among all government backed PSU’s.

With this, it is looking forward to a 1.6 percent revenue growth in the current financial year which would be the lowest in the past 15 years for which data is publicly available as in previous year it showed the growth of 17 percent . 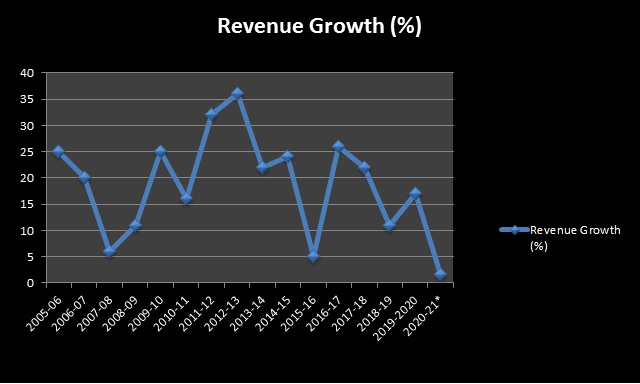 As per a senior industry analyst the reason for the decline is the systemic decline in interest rates which has further lowered interest income and the lower demand for new projects due to COVID-19.

Hitesh Sachdeva, partner, deal advisory, KPMG India commented that on the revenue position of RE financing agencies and the market conditions for them such companies have faced stiff competition from public and private sector banks this year. He added that this situation is likely to persist through COVID-19 recovery as banks were faced with lower credit off take from general industrial sectors and thus were more open to lending to RE assets. Even where banks see higher risk due to low bid prices, they have lent to groups like the Adani group, or even the Tatas, based on the balance sheet strengths and comfort with those groups.

Fitch Ratings conducted an assessment and upgraded IREDA’s long-term foreign- and local-currency issuer default ratings (IDR) and long-term senior unsecured rating and added that the outlook is negative. It said that the company has postponed its IPO plans, which could have reduced the government’s stake to 85 per cent, due to market volatility following the COVID-19 pandemic.

The MoU was signed by Indu Shekhar Chaturvedi, secretary, MNRE and Pradip Kumar Das, chairman and managing director, IREDA. It said that Rs 2,406 crore revenue target has been set under the ‘excellent’ rating along with various performance-related parameters such as operating profit as percentage of revenue from operation, profit after tax as a percentage of average net worth, loan disbursement, overdue loan, etc.

According to IREDA’s press statement released after signing the MoU, as on 2 November 2020, it had financed more than 2,700 renewable energy projects in India with loan disbursements to the tune of Rs 57,000 crore and supported green power capacity addition of 17,259 MW in the country. It added that during FY20, it financed projects that resulted in a total capacity addition of 952.69 megawatt (MW), of which 722 MW of solar, 120 MW of wind, and 110 MW of hydropower capacity was added. In the past five years upto march 2020 it sanctioned Rs 54,774 crore loans and disbursed Rs 37,350 crore loans.

According to a report presented in the Lok Sabha in 2018, IREDA had prepared its business plan for the next five years projecting a market share upto 15 per cent and estimated that it would raise its requisite equity capital through an IPO by June 2017.