Maharishi University of Management’s new solar power plant, designed and installed by Ideal Energy powered up for the first time in Mid-December. 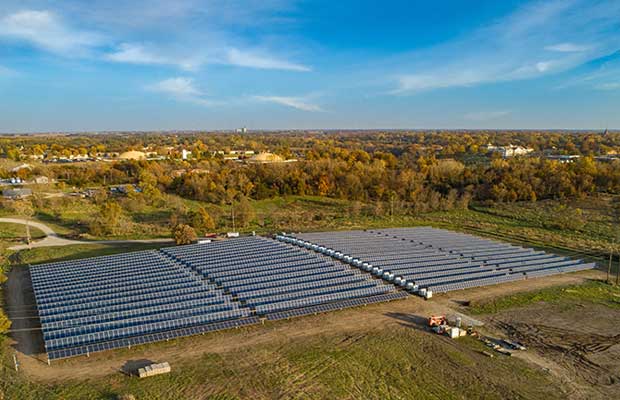 The plant is the first system of its kind in the Midwest and among the most technologically advanced solar installations in the United States.

The project also includes a 1.05 megawatt-hour battery energy storage system, which works in tandem with solar energy to reduce MUM’s energy costs by ‘peak shaving’ –  drawing power from the solar panels or batteries instead of from the grid during expensive peak times of the day.

The University’s new solar and storage power plant, along with two smaller solar arrays and a small wind turbine, will bring the University’s renewable energy share to 43%.

It will directly power 1/3 of the campus’s electricity usage. By combining active tracking technology with battery energy storage MUM will cut its electric utility costs by a projected 30%.

“We’ve designed and built other solar plus storage arrays, but this is the most advanced so far,” said Troy Van Beek, founder and CEO of Ideal Energy. “It perfectly matches MUM’s needs and checks all the boxes – tracking, battery energy storage, and artificial intelligence.”

“We believe it will serve as a model for other universities,” he added.