The ISA is open to 121 prospective member countries, most of them located between the Tropics of Cancer and Capricorn. As many as 62 countries have signed the ISA framework agreement, out which 32 have ratified the pact. 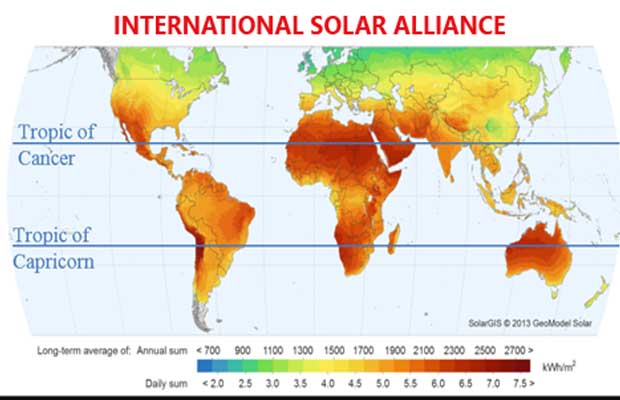 In a significant development, the US and China are also keen to join International Solar Alliance (ISA) which is aimed to promote solar energy across the member countries falling in the tropic of cancer and capricorn, according to a senior official.

Echoing the same views, T S Tirumurthi, External Affairs Secretary (Economic Relations) said, “All of them (US and China) have taken part very actively in the steering committee proceedings. The last one was held on February 20, 2018 in New Delhi. They are participated. So, there is great deal of enthusiasm to this initiative (ISA)”.

The founding ceremony of the International Solar Alliance was held in New Delhi on March 11. The ISA has set a target of 1 TW of solar energy by 2030, which current French President Emmanuel Macron said would require $1 trillion to achieve.

The ISA is open to 121 prospective member countries, most of them located between the Tropics of Cancer and Capricorn. As many as 62 countries have signed the ISA framework agreement, out which 32 have ratified the pact.

The US and China have not signed the ISA especially when both the countries have technology and production capacity might with them. To meet solar demands, India has been importing a large quantum of solar equipment from foreign countries especially China, Malaysia and Taiwan.

India, has set an ambitious target to produce 100 GW of solar energy by 2022, would account for a tenth of ISA’s goal.