With 70 GW installed renewable power capacity, renewable energy has a share of over 20 percent of the total installed capacity in the country, it further added. 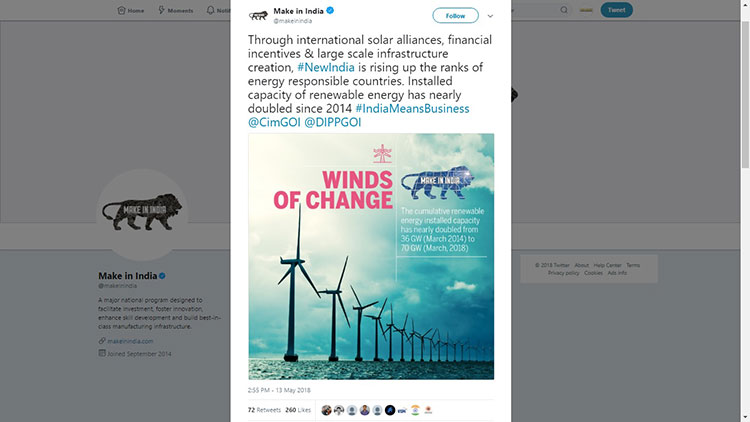 In a major boost to cleaner and greener planet, the total renewable energy installed capacity of the country has risen significantly in just four years i.e. from 36 GW in March 2014 to 70 GW in March 2014, as per the government.

The Make In India, a Government of India’s major national program, tweeted that, “Through international solar alliances, financial incentives & large scale infrastructure creation, #NewIndia is rising up the ranks of energy responsible countries. Installed capacity of renewable energy has nearly doubled since 2014.”

With 70 GW installed renewable power capacity, renewable energy has a share of over 20 percent of the total installed capacity in the country, it further added.

In recent years, renewable energy has become cheaper and could significantly reduce the dependence of conventional energy sources.

Besides, during the year 2017-18, there is a total of 100 billion units of power have been generated in the country from all renewable energy sources.

It further added that, India’s renewable energy production now stands well ahead of the total electricity generation of nations such as Philippines and Belgium.