UN DSG Amina Mohammed has said that India’s leadership on solar is reason to believe that “we can achieve our climate goals.” 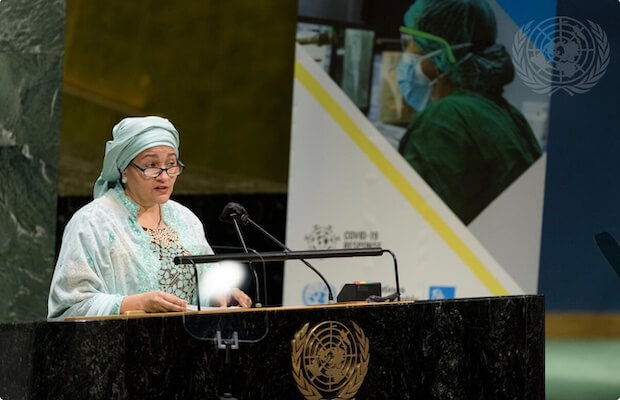 UN Deputy Secretary-General Amina Mohammed has said that India’s leadership on solar and industry transition amidst over 110 countries committing to carbon neutrality goals by 2050 is reason to believe that “we can achieve our climate goals.”

While addressing a webinar titled ‘People and Climate – Just Transition in Practice’, the UN DSG asserted that as governments look to restart their economies after COVID-19, it is vital to pursue a recovery that is not only sustainable, resilient and fair but also job-rich.

“Today there is encouraging news: Japan and the Republic of Korea, together with more than 110 other countries, have now pledged carbon neutrality by 2050. China says it will do so before 2060. India’s leadership on solar and the industry transition is reason to believe that we can achieve our climate goals,” she said.

Further adding that in this context it becomes essential that the European Union delivers on its promise to adopt a new climate target this year, by coming forward with a baseline of reducing emissions by at least 55 percent by 2030.

“It is also crucial for the European Union to accelerate its transition toward renewable energy. There must be no new coal, and all existing coal in the European Union and in all OECD countries should be phased out by 2030, and by 2040 elsewhere. And the financing of fossil fuels internationally must come to an end.”

She believes that by fully implementing its plan to green the region, “Next Generation EU”, and by mainstreaming climate change into its long-term budget, the European Union can show the world how to move to carbon neutrality while ensuring prosperity and a just transition.

“A just transition is critical. Poland has long highlighted this. The notion that we must choose between climate action and economic strength has been proven wrong. Investments in renewable energy yield three times more jobs than investments in fossil fuels. Yet, a just transition must be a managed transition.”

She went on to point out that there are model agreements that can serve as inspiration. Poland and the European Union can be global champions on a just transition, with technologies and approaches that can be applied around the world, “demonstrating that the transformation we need to see globally is possible.”

She concluded by stating that “meeting the climate challenge means major shifts in our economies and societies, and these will naturally bring significant impacts on people, families and communities that touch the core of their identities and well-being. A just transition cannot be an afterthought; it an integral part of climate action and a responsibility for all of us.”