The Union Home Minister Amit Shah has said that the country’s largest solar project of 7.5 GW worth Rs 50,000 crore will be completed in four years, besides 9 MW hydro power project. 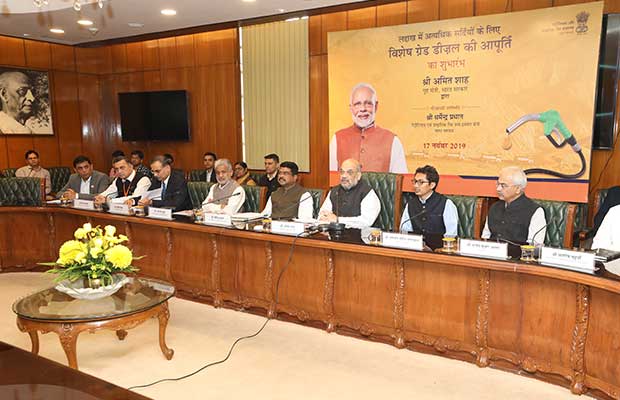 Shah further added that, this will not only bring development in the Ladakh region but will also create employment opportunities.

He was speaking, through video-conferencing, during the launch of the first winter-grade diesel outlet for the Ladakh region. This outlet will help in addressing the problem faced by the Ladakh people due to loss of fluidity in diesel during extreme winter conditions.

Now, the people of Ladakh, Leh and Kargil will enjoy same rights and will be an equal partner in the development of the country, Shah added.

During the occasion, the Minister also highlighted various measures taken by the NDA government in past five years, including the transmission line setup between Srinagar-Leh for electricity; fourteen solar power projects announced for Leh and Kargil region; opening of Ladakh University along with two new degree colleges; five new tourist circuits and tracks for tourists & mountaineers; subsidised helicopter sewa and up gradation of district hospital etc.

On the winter-grade diesel outlet, he said this will not only smoothen the travel & transportation during peak tourist season in extreme cold, but will also help in giving a boost to the tourism and supply needs of the Ladakhi people. It will also help in the overall economic development of the region.

The winter grade diesel was produced by Panipat Refinery and for the first time it has a pour point of – 33o Celsius. Besides, it does not lose its fluidity characteristic even in the extreme winter conditions of the region unlike the normal grade diesel, which becomes exceedingly difficult to utilize.