The study which was published in the journal Nature Communications, also stated that there is a slight possibility of sun-induced climate cooling next year. 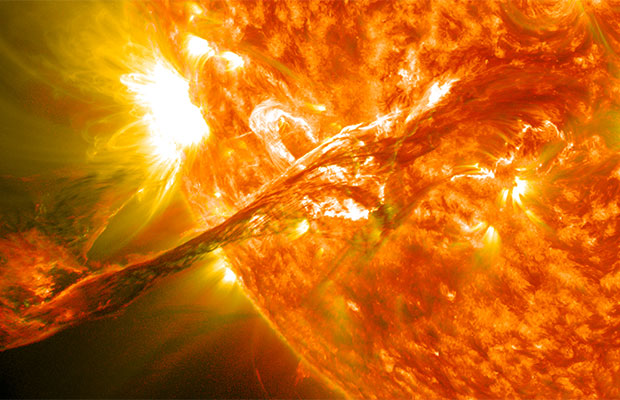 A team of researchers from the Indian Institute of Science Education and Research (IISER) Kolkata and Inter-University Centre for Astronomy and Astrophysics (IUCAA) Pune have developed a model to predict solar storms in the next decade.

The study which was published in the journal Nature Communications, also stated that there is a slight possibility of sun-induced climate cooling next year.

Solar storms have the capacity to cripple satellite communications and Earth’s electric power grids and better prediction model will save huge costs in damage.

The researchers put forward a prediction for the upcoming cycle of the sunspot which reveals the expected conditions in space over the coming decade.

Sourav Pal, Director of IISER Kolkata said, “This research has direct relevance for protection of India’s space-based technological assets and the global climate.”

Professor Dibyendu Nandi from IISER Kolkata along with his PhD student Prantika Bhowmik devised a technique and has made the prediction that the next sunspot cycle will begin about a year after the end of the current cycle and peak in the year 2024.

“The space weather is governed by a constant stream of charged particles—electrons and protons—flowing out from the Sun and permeating the solar system,” said Nandi, who is also a research associate at IUCAA.

“It has been known for some time that the cycle of sunspots control all these aspects of solar activity and determines its influence on our space environment and climate,” said Bhowmik.

Tags: Indian Institute of Science Education and Research, Inter-University Centre for Astronomy and Astrophysics, Solar Energy, solar flares, Solar storm
"Want to be featured here or have news to share? Write to info[at]saurenergy.com