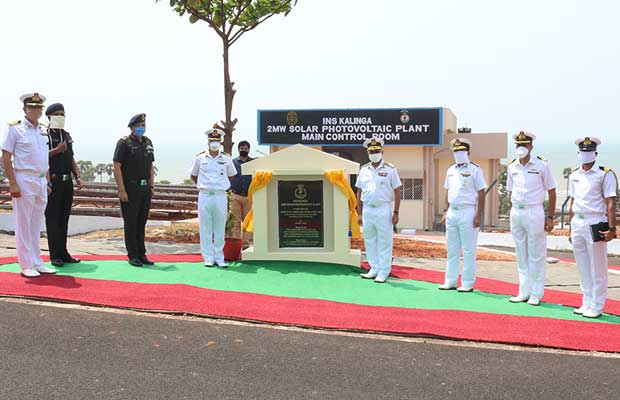 The move was in line with the GoI’s objective to achieve 100 GW of renewable energy through solar power by 2022 as part of the National Solar Mission (NSM).

Furthermore, this solar plant, which is largest in the ENC, has an estimated life span of 25 years.

Despite the lockdown, all concerned agencies including Eastern Power Distribution Company of AP Ltd (APEPDCL) worked out a contingency plan adhering to all guidelines promulgated for Covid-19 pandemic and executed the work, said Defence Ministry.

Commenting on the solar power plant commissioning, Vice Admiral Atul Kumar Jain said that the commissioning of this plant demonstrates the commitment of Eastern Naval Command (ENC) towards the conservation of the environment and eco-friendly measures.

INS Kalinga is currently headed by Cmde Rajesh Debnath, and has taken significant strides in Green Initiatives since it’s setting up in the early 1980s, including afforestation, numerous plantation drives, coastal cleanup drives and protection of the Geo-Heritage site “Erra Matti Dibbalu”.

The ENC is among the three command-level formations of the Indian Navy. It is headquartered in Visakhapatnam in the state of Andhra Pradesh (AP). ENC is responsible for all naval forces in the Bay of Bengal and parts of the Indian Ocean and the naval establishments on the east coast of India.