Naidu’s visit is highest level from either side since establishment of diplomatic ties between the two countries in 1972. 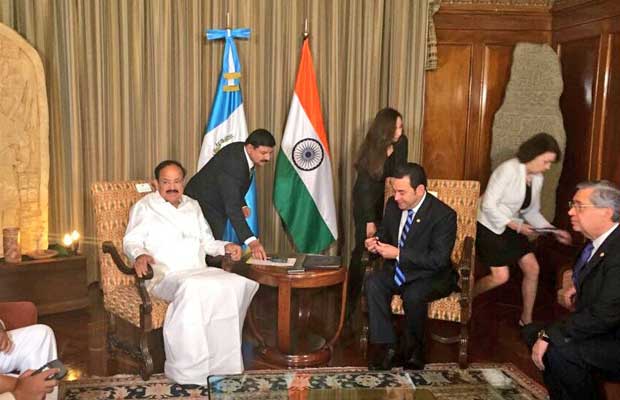 In a significant development for the renewable sector, India has agreed to supply solar panels for the Guatemala’s airports.

This decision was one of the several outcomes of extensive talks Vice President of India M. Venkaiah Naidu held with the President, Vice President and Parliament Speaker of Guatemala in the capital Guatemala City.

Naidu’s visit is highest level from either side since establishment of diplomatic ties between the two countries in 1972.

Presenting the context of his first overseas visit as Vice President, Naidu told Guatemalan leaders that, “India is keen about enhancing its engagement with Latin America and looks at Guatemala, the most populous and biggest economy in Central America, as the gateway. My visit to Guatemala is a clear indication of this thinking in New Delhi. Going by trade patterns and consumption needs, we are complementary in nature and not competitors and need to take our relation to a new high taking advantage of emerging opportunities in both countries for mutual benefit.”

Guatemalan President Jimmy Morales said his country could benefit from the “successful economic story of India” and stressed on the need for improving bilateral engagement in various fields.

He also referred to huge popularity of Indian made two wheelers given their quality and after sale service in Guatemala beating the popular competitors.