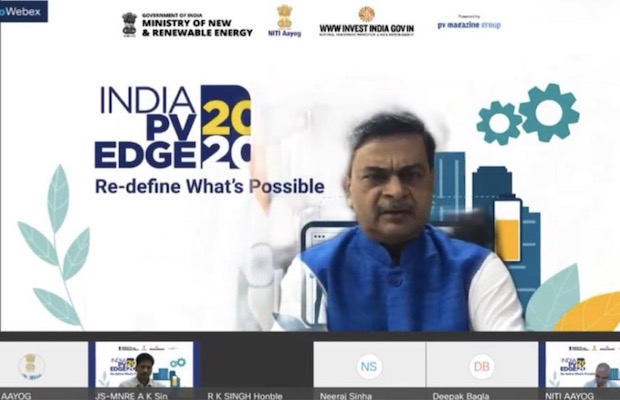 India will soon tighten provisions for imports of solar equipment in order to encourage more domestic manufacturing even as power demand post the covid outbreak has rebounded, RK Singh, Minister for New and Renewable Energy told a conference on Tuesday.

Speaking at a conference titled “India PV Edge 2020,” the minister said that the government was not only planning to impose a basic customs duty but also introduce a list of approved providers and manufacturers to ensure that there is no injury to the domestic manufacturers.

“We are putting up barriers. One of the reasons is dumping that has happened from some countries at very low prices. We are going to put in place customs duty. We are also going to have an approved list of providers and manufacturers,” he said.

Singh said the measures should cumulatively help to ensure that there is no dumping in India.

India is likely to soon impose a 20 percent basic customs duty on imports of solar modules, which would come over and above a 15 percent safeguard duty.

The majority of India’s imports come from China, but tensions between the two neighbors have ratcheted due to a military standoff at the border. The outbreak of covid at the start of this year disrupted supplies of equipment, which is another reason why India wants to build up its domestic manufacturing capacity.

Meanwhile, power demand in the country, which had slumped by 34 percent year on year in April in wake of the covid outbreak, rebounded to the same year-ago level in August. The demand in September exceeded last year’s level during the same month, he said.

The government plans to soon roll out a Product Linked Incentive Scheme to promote greater manufacturing of solar equipment locally to meet the additional demand. These will include an interest subvention scheme that will be aimed at equipment exports from the country.

Singh said that the incentives provided will be higher for futuristic and advanced technology. India is on track to achieve a renewable energy target of 175 GW by 2022, out of which 100 GW will be from solar, he said.

He highlighted that India’s share of power generation capacity of renewables has reached 38.5 percent against a target of 40 percent by 2030 that the government had pledged at the COP 21 summit. Renewable energy will have a 60 percent share of the capacity by 2030, he said.

“Our vision is very clear. We want to electrify our economy and we want to green our electricity,” he said. “Many of the traditional plants are getting retired. We will be retiring 29 such plants,” he said, adding that they will be replaced with renewable energy generation.

Indu Shekhar Chaturvedi, secretary at the Ministry for New and Renewable Energy, said that the government recognised that the current manufacturing capacity was limited.

Amitabh Kumar Sinha, joint secretary at the Ministry of New and Renewable Energy (MNRE) said that India will be needing at least 30 GW of cells, wafers and modules to meet domestic requirements. “We are in discussions with manufacturers who can come to India. More capacity is expected to come to India,” he added.