Peru is a founder member of the International Solar Alliance (ISA), established with India taking the initiative. 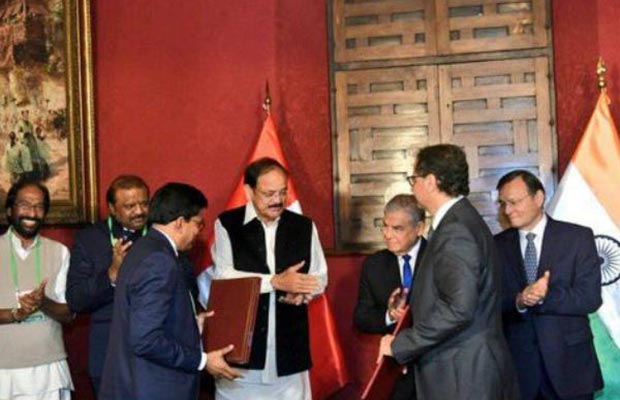 During the Vice President M. Venkaiah Naidu’s week-long visit to three Latin American countries, India and Peru has signed a pact in Lima on cooperation in the field of New and Renewable Energy.

Also, Peru is a founder member of the International Solar Alliance (ISA), established with India taking the initiative.

Besides, Naidu held extensive talks with President, Prime Minister and senior Ministers of Peru in Lima on a wide range of issues indicating specific areas for enhanced engagement.

Moreover, the top leadership of Peru has acknowledged that their country has a lot to learn and benefit from the success story of India and resolved with India to significantly enhance trade relations as the two countries celebrated 55 years of diplomatic ties in Lima.

During the delegation level talks, the Peruvian Prime Minister Cesar Villanueva Bardales noted that India is acknowledged as a leader in pharma sector and Peru could take benefit of the same.

While speaking of the potential of bilateral trade between the two countries, Minister of Foreign Trade and Tourism of Peru Rogers Valencia Espinoza said Peru was keen about concluding a Comprehensive Free Trade Agreement with India.

Meanwhile, the Peru’s Minister of Foreign Affairs Nestor Popolizio Bardales stressed that India deserved to be a Permanent member of the United Nation’s Security Council (UNSC) in-line with its size, role and responsibilities in the global scheme of things. He reiterated Peru’s support to India in this regard.