Moreover, India and Guatemala have also agreed to support each other’s candidature for non-permanent membership in the United Nations Security Council (UNSC). 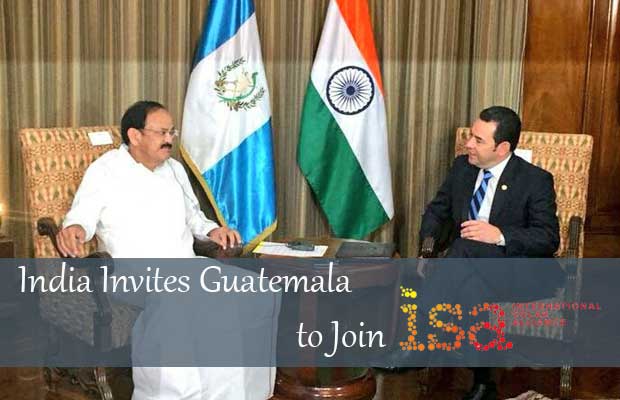 With an aim to provide greener planet to our next generations, India has invited Guatemala to join the International Solar Alliance (ISA), the first international inter-governmental treaty based organization aiming to boost solar energy.

During the official visit, Vice President M. Venkaiah Naidu has invited Guatemala to join the solar alliance stating it has found wide appeal with 61 countries already joining it.

Besides, at the banquet hosted for the visiting delegation, Guatemalan Vice President Dr. Franco invited India to send a delegation to the Conference of Ibero America to be held in Guatemala City in November this year which is to be attended by all the Latin American Countries besides Spain and Portugal.

This is the first time India got an invitation for the conference held once in three years.

Moreover, India and Guatemala have also agreed to support each other’s candidature for non-permanent membership in the United Nations Security Council (UNSC).

Guatemala will support India’s candidature for UNSC membership for 2021-22 while New Delhi will do so for 2031-32 for Guatemala.

During the meeting, Guatemalan President Jimmy Morales said his country could benefit from the successful economic story of India and stressed on the need for improving bilateral engagement in various fields.

He also referred to huge popularity of Indian made two wheelers given their quality and after sale service in Guatemala beating the popular competitors.

Meanwhile, he directed his deputy for detailed talks with the visiting dignitary for exploring new avenues of cooperation with India.