India Gets its First Solar-Powered Expressway

This is the country’s first highway to be lit by solar power and at every 500 metres, as there are eight solar power plants on this Expressway. 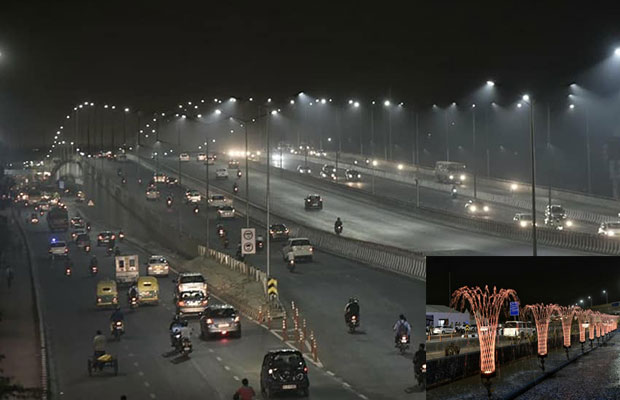 The Prime Minister Narendra Modi has inaugurated the country’s first solar-powered smart and green Kundli-Ghaziabad-Palwal (KGP) Expressway which is 135 km long. It is also known as Eastern Peripheral Expressway.

This is the country’s first highway to be lit by solar power and at every 500 metres, as there are eight solar power plants on this Expressway, with a capacity of 4000 KW (4 megawatt) for lighting of the underpasses and running solar pumps for watering plants and also having arrangement for rainwater harvesting on both sides at every 500 meters and there is drip irrigation for plants all along the expressway.

The Prime Minister also inaugurated the Digital Art Gallery of National Highway Authority of India (NHAI) at the toll plaza in Jakhauli village of Sonipat.

While, PM went around the Gallery he was informed in detail about the journey right from the begging of construction work of KGP Expressway till is completion by using 3D technique.

These included acquisition of land for the Expressway, redressal of grievances related to farmers, beginning of ground work on the Expressway, strategy for the timely completion of work, technique used in the construction work, use of solar energy, plantation and benefits of the Expressway for the people of Delhi and other areas.

Secretary of Ministry of Road Transport and Highways Yudhvir Singh Malik said a sum of Rs 5,763 crore has been spent on this six-lane and 135 kilometers long highway.

He further added that this is the country’s first access control highway and the vehicle would be charged toll on the basis of distance covered.

Arrangement of rain water harvesting has been made at every 500 meters on the both sides of this Highway. The entire Highway is powered by solar energy, he added.