In addition, India will extend a line of credit of USD 27.5 million to support a power transmission project in Pikin Saron area, says President Kovind. 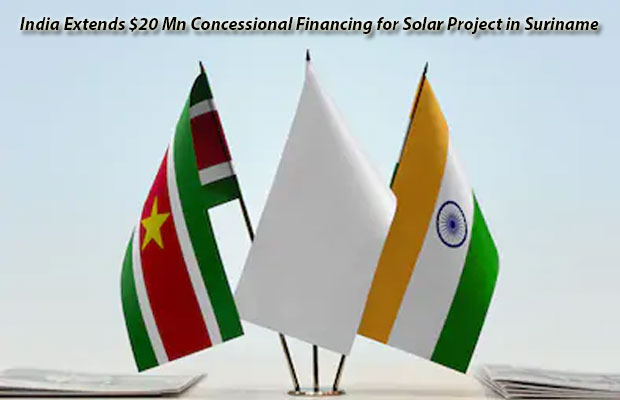 In a move to provide clean energy to a cluster of 49 villages, President of India Ram Nath Kovind said that India will extend concessional financing of USD 20 million for setting up a solar project in Suriname.

While speaking on climate change, President Kovind stated that it is an international concern and a foreign policy issue. He commended Suriname for its enlightened approach on climate change.

President Kovind added that India is proud to have Suriname as a co-partner in the International Solar Alliance. He thanked Suriname for ratifying its entry into the ISA.

He stated that this will allow us to collaborate on solar energy projects that will be of benefit to Surinamese people and our planet.

Indian President further said that it is not just in the field of renewable energy that India would want to partner Suriname. India is happy to share its developmental experiences with Suriname, as per Suriname’s needs, desires and priorities.

India will assist Suriname in establishing a Centre of Excellence in Information Technology. An MoU to take forward this project was signed.

Besides, the two sides also concluded four MoUs in the fields of elections, diplomatic academies partnership, employment for spouse of diplomats of the two countries and archives.