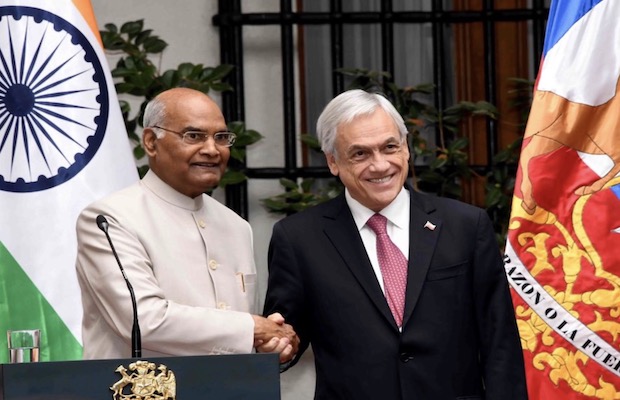 Kovind, who arrived after visiting Bolivia and Croatia, is on the last leg of his three-nation visit. He said that India looks forward to working with Chile to promote solar energy worldwide and enhance global action to combat climate change.

“President Pinera and I had a wide-ranging discussion on all issues of mutual interest. We exchanged views and assessments of our respective neighbourhoods and regions,” he said.

Chile is the sixth largest trading partner of India in the Latin American region. The bilateral trade between the two nations registered an impressive increase of 50 percent in 2017-18, to reach $ 2.8 billion.

On March 25, 2019, the President embarked on a state visit to Croatia, Bolivia and Chile to hold talks with the leaders of these countries and strengthen ties in trade, investment and renewable energy.

During his state visit to Bolivia, the president facilitated the agreement for India to sign a Memorandum of Understanding (MoU) with Bolivia, leveraging its way into the lithium reserves of the South American nation for exploration and extraction of lithium, a prime component used to power electric vehicles.

In a joint statement, issued after talks between President Ram Nath Kovind and his Bolivian counterpart Evo Morales Ayma, both the countries “Agreed to forge a mutually beneficial partnership to facilitate Bolivian supplies of lithium Carbonate to India and foster joint ventures for lithium battery/cell production plants in India.”

This move will make Bolivia, which is known to have one-fourth of the world’s lithium reserves, one of the major provider of metal for India’s e-mobility and e-storage needs.