Fuel Cell India, an initiative dedicated to promoting Renewable and Hydrogen Energy & Fuel Cells in India has filed a plea stating that the FAME India Scheme endeavors to encourage domestic manufacturing of EVs along with creating and expanding the Indian EV market. Although under FAME I the hybrid EV is defined as a vehicle using a consumable fuel and hydrogen fuel cell qualifies it, yet there is no inclusion of hydrogen fuel cell in FAME II.

A hydrogen fuel cell is an electrochemical cell that converts the chemical energy of a fuel (hydrogen) and an oxidizing agent (often oxygen) into electricity through a pair of reactions. Providently, the ‘technology definition’ for all segment of vehicles is defined as; 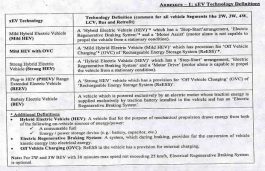 The main purposes of the FAME scheme are to make Indian producers independent of petroleum resources, to check the internal combustion engine (ICE) vehicles’ impact on the environment, and to push the adoption of alternate fuels including EVs in the automobile industry of the country.

The Delhi HC has also taken the opportunity to direct the government to consider allocating unused funds from the FAME II scheme for promoting hydrogen fuel cell EVs in the country, along with the construction and operation of refueling stations.

According to the HC, if hydrogen-fueled vehicles fall under the FAME II scheme and take the benefit of incentives, manufacturers like Hyundai and Toyota could think of bringing their vehicles like the Toyota Mirai and Hyundai Nexo to India. Currently, vehicles running on hydrogen fuel cells offer a greater driving range in comparison to battery electric vehicles (BEVs).

The plea indicates that the FAME scheme has not been able to use its budget towards the adoption of EVs adequately. Giving an instance, only INR 20 crores out of INR 700 crores have been expended from 2019 up to 10th February 2020 for setting up charging infrastructure.

The HC move, while encouraging for Hydrogen fuel vehicles, falls well short of how the whole issue should be approached by the executive branch of governance.  After all, while one can understand the courts stepping in to ensure remedial measures like lower pollution or proper enforcement of laws happens, seeing the courts propose adding categories to FAME 2 or otherwise is odd. It indicates a disconnect between various functions of governance and pretty much guarantees poor implementation. To use the court’s own example, if actual disbursements under FAME 2 for EV charging are so low, then what makes the court think the issue is with ignoring Hydrogen fuel vehicles? Perhaps it is with the way the process to judge and approve disbursements has been designed.