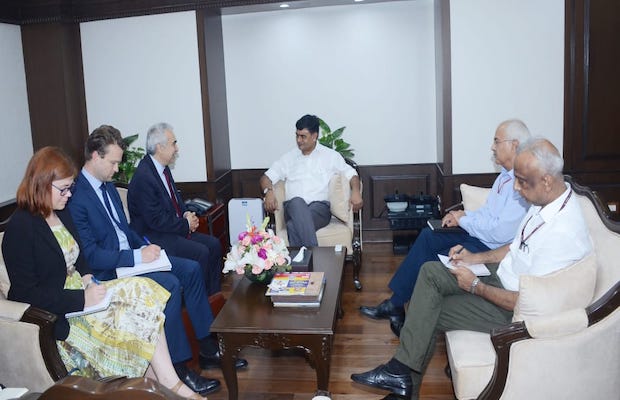 Various issues came up for discussion during the meeting including the shift towards Electric Vehicles, renewable energy, and battery & hydrogen storage.

Dr. Birol appreciated the efforts made for energy access under Saubhagya scheme and for energy efficiency under UJALA scheme. “Your achievements in energy access and in the distribution of LED bulbs are amazing and a big success story,” he said adding “It changes the people’s lives.”

Recently, in a report published by IEA in collaboration with the Council on Energy, Environment and Water (CEEW), it was revealed that investments in India’s renewable energy market have doubled over the last five years. And at $20 billion in 2018, it surpassed the capital expenditure in the coal power sector.

The report analyzed the risk perceptions of debt financiers towards solar photovoltaic (PV) and wind projects from 2014 to 2018. It also examines recent developments impacting the pace of capacity addition in India.

Further, it included an analysis of thermal power projects in order to assess the standing of renewables and thermal assets. The study also takes stock of the impact of a recent policy measure – the imposition of safeguard duties on solar PV cell and module imports – on the pace of project awards and the challenges facing the solar park model.

The report comes in the backdrop of the Economic Survey highlighting that India’s additional clean energy investment requirement is nearly $80 billion till 2022, growing more than three-fold to $250 billion during 2023-30.

The report further highlighted that a maturing market along with reduced risk perceptions and enhanced bankability for renewables has contributed to improved availability and pricing of project debt finance over time, facilitating lower cost investment. Interest rate spreads for both wind and solar PV declined between 75 to 125 basis points, indicating declining risk perceptions between 2014 and 2018.