The hiked prices of imported solar PV modules by nearly 15-20% over the last 4-5 months, may impact the returns of solar power project developers.

According to a recent release by the independent rating agency ICRA, the price rise in imported solar modules has been mainly caused due to anincrease in the price of polysilicon, a key input for cell & module manufacturers. As per an ICRA note, given the high import dependency for PV modules for a majority of utility scale solar power in India, such a hardening in the price of PV modules, if sustained, remains a near-term headwind.

“This risk is especially significant for the capacity won by developers through the bidding route over the last six to nine months (amounting to 4-GW1 ) at tariffs ranging largely between Rs. 2.00 per unit and 2.25 per unit; and scheduled to be commissioned over the next 12-15-month period. This apart, the recent surge in metal prices is also leading to upward pressure on the overall capital cost for solar power projects”, said ICRA.

Since the BCD notification for cells and modules is effective from April 2022 onwards, a surge in demand for imported modules, particularly in the fourth quarter of the current fiscal in turn, supporting the elevated price levels for PV modules, could be possible. Hence, both the module price changes and clearing of supply contracts by module OEMs from China in the near term continue to remain a key monitorable for the solar power developers.

“Alternatively, the tariff increase required to offset such a module price increase is estimated at 20-22 paise/unit. This, along with the impact of the basic customs duty (BCD) on imported PV modules, is likely to result in the overall bid tariff increasing by about 55-60 paise/unit for the forthcoming auctions. Nonetheless, the solar bid tariff, after factoring in this dual impact, is still likely to remain below Rs. 3/unit,” said Mr. Girishkumar Kadam, Senior VP & Co-Head at ICRA.

The report suggests that the registration of module manufacturers outside India, in the Approved List of Models and Manufacturers (ALMM) issued by the Ministry of New and Renewable Energy (MNRE), Government of India in March 2021, remained affected due to the lockdown restrictions and procedural requirements so far based on industry sources. According to the notification issued by the MNRE, the projects bid out under the standard bidding guidelines, post-April 10, 2021, are obliged to procure modules from the approved list.

As a result, there could be challenges for the Indian developers in planning the procurement of imported PV modules, especially given the capacity constraints for domestic manufacturers.

Nevertheless, the credit outlook on the solar energy sector remains stable, given the improved tariff competitiveness, 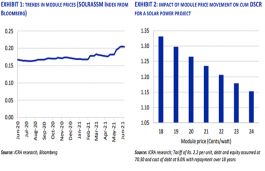 a supportive regulatory framework through must-run status for these plants, leading to the satisfactory operating track record, as well as the availability of liquidity buffer for the issuers rated.

Speaking of the outcomes, Vice President at ICRA, Mr. Vikram V stated, “As a result, the uncertainty on the timelines for inclusion of module suppliers from China in the ALMM list may affect the incremental bidding activity in the solar power sector. Nonetheless, cumulative solar project awards as of the date remain strong at ~28 GW, which provides healthy visibility on the capacity addition over the medium term.”

Interestingly, the agency did not go into the issue of the possible impact should safeguard duty of 14.90 percent, due to end on July 29, was not reimposed on these select projects for the period from August to March’22. Theoretically, that could reduce the impact considerably.