Iberdrola has inaugurated the Andévalo solar plant, a ground-breaking facility that paves the way for a more sustainable energy and production model.

Iberdrola has inaugurated the Andévalo solar photovoltaic plant, a ground-breaking facility that paves the way for a more sustainable energy and production model. Iberdrola Chairman, Ignacio Galán, accompanied by the president of the Andalusian Parliament, Juanma Moreno, explained that “Andévalo is an example of the operations we are undertaking in Andalusia to triple our renewable potential in the region to 3,000 MW over the next 5 years.” 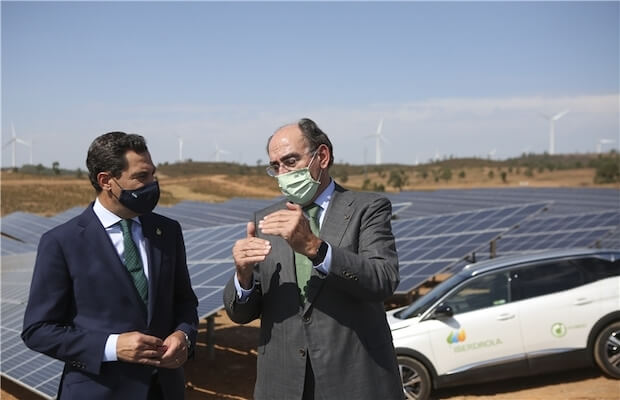 This new plan represents an investment of nearly EUR 1.5 billion and will allow for the creation, in the construction and assembly works alone, of 5,500 new jobs in the region. Iberdrola is currently the top wind power developer in the region, with an installed renewable capacity of 900 MW.

Andalusia thus becomes one of the largest growth centres for Iberdrola in Spain, where the company claims it already leads in the generation of clean and green energy, and where it plans to double its installed capacity over the coming five years, thereby contributing to the energy transition and the creation of jobs in Spain. “This is Iberdrola’s commitment: to drive a clean, safe and efficient energy transition and unite forces to accelerate a green recovery that leaves no-one behind,” he explained.

Located in the municipality of Puebla de Guzmán, in Huelva, the Andévalo photovoltaic plant consists of 150,000 solar PV panels and will avoid the emission of 15,000 tons of CO2 into the atmosphere every year. The installation forms part of the largest wind power complex in Western Europe – Andévalo (292 MW) – developed and managed by Iberdrola since 2010.

At Andévalo, Galán stressed that “the energy transition is the best way forward towards a more sustainable and healthy society, promoting responsible consumption and the circular economy and generating quality and lasting local employment.” It is, moreover, “a unique opportunity to drive growth and well-being in Andalusia and also in Spain as a whole.”

“To make the most of it,” said the Iberdrola chairman, “we need to attract large volumes of private investment. And that requires a long-term countrywide strategy, such as that defined by the National Integrated Energy and Climate Plan, as well as to create confidence.”

Galán reiterated that the financial crisis is affecting all the countries in the world and the solutions are the same – more investment, greater productivity and increased stability and legal and institutional security. “But we must hurry”, he insisted. “Because investing in infrastructure like Andévalo means creating the growth and employment that we need, at the same time as building a better and more efficient country for future generations.”