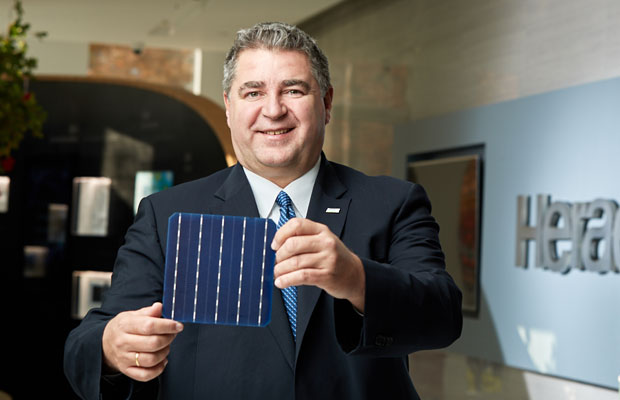 Andreas Liebheit, Heraeus Photovoltaics President said that the world’s energy picture is reaching a global tipping point that will establish solar energy and other renewable sources as the most affordable ways to produce electricity.

The driving factor giving momentum to this effort is China’s ambitious renewable energy program, which encompassed over 130 billion USD in 2017, more than all other countries combined, he added.

Liebheit noted that these strategic investments are having a global domino effect that continues to increase adoption of renewable energy.

With a significant energy portfolio encompassing photovoltaics (PV), wind, fuel cells and battery technology, Heraeus has been a leading driver of efficiency and innovation in the renewable energy industry.

While briefing at the 2018 SNEC International Photovoltaic Power Generation and Smart Energy Exhibition and Conference, Liebheit shared his company’s insights on the long-term future for renewable energy and its continued growth and adoption.

Liebheit further said that China’s strategic policies and massive investments have clearly positioned China as “the owner of the global PV supply chain.” The continued adoption and growth of PV in China is reaching critical mass, enabling costs to become comparable to and eventually cheaper than traditional forms of energy.

In 2016, Heraeus projected a 50 percent decrease in the levelized cost of renewable energy within 5 years, from which 27 percent have already been realized after just 2 years. “We predicted a cost reduction glide path, but the cost drop is significantly ahead of projections. It is faster than a glide.”

Renewable Wind and PV energy price at auctions in Mexico and Saudi Arabia have already reached prices below $0.018/kWh.

Besides, another compelling trend is China’s success in improving air quality. One of its best known initiatives, called Beijing Blue Sky, has seen a significant improvement in air quality from “grey” to “blue sky” days in the Beijing region.

With the doubling of use of PV/solar energy and cutting coal use by half during that period, the region saw 226 blue sky days in 2017 compared to only 176 in 2013.

China’s renewable energy strategy has integrated into its belt and road initiative. China announced plans to build renewable energy manufacturing plants in about 20 countries within their road and belt map.

Liebheit points out this strategy has a three-fold effect: He says, “China reinforces its world leadership in PV, drives further adoption of renewable energy and economically strengthens its trading partner relationships in the region.”

The investments are paying dividends: average battery pack prices continued to fall, down to $209/kWh in 2017, a 24 percent decrease.

He added that, “China’s build-out of a smart, integrated grid that maximizes the generating capabilities of all these renewable sources is, for me, the last piece of the puzzle.”

Also, Liebheit points to another factor helping renewable energy to close the “cost gap” with fossil fuels: the innovation ceiling of legacy energy.

He noted that coal and fossil fuels are mature and “there is little that can be done from an innovation perspective to attain more performance and efficiency.”

Renewable energy, Liebheit observes, is not burdened with an innovation ceiling. He says, “Across our own renewable energy solutions portfolio, which includes silver metallization pastes, PV cell optimization services, fuel cells and battery technology, we achieve significant innovation and performance gains regularly. The same can be said of the industry overall.”

With innovation and adoption on a continued upward trajectory and cost per-kWh declining, Liebheit further said that, “global adoption of renewable energy as the best, most flexible and cheapest way to generate electricity is not just possible in the next decade, it is inevitable.”