With total shipments reached more than 126 GW (or 126,735 MW), the global photovoltaic (PV) inverter shipments grew by 18 percent in 2019 on a y-o-y basis, as said by the global energy research & consultancy firm. 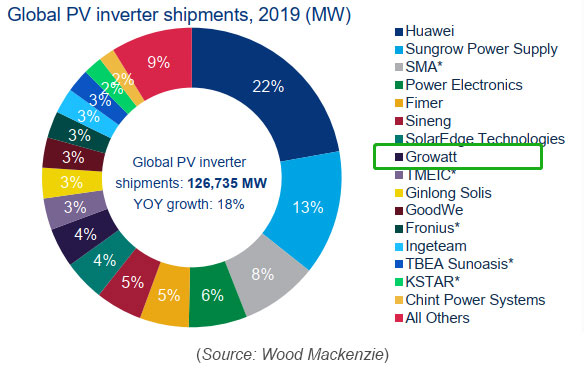 Among all the leading inverter suppliers, China-based inverter manufacturer Growatt shipped an aggregate capacity of more than 5 GW during the year and secured 8th position.

However, in the APAC region as per the report, Growatt ranked on 4th position being PV inverter supplier in the region and remained on top of the inverter suppliers that focus on the manufacturing of string inverters.

Recently, the company was also ranked No. 1 inverter supplier for the rooftop solar sector in India as per the research and advisory services firm JMK Research & Analytics.

Commenting on the development, Lisa Zhang, Marketing Director of Growatt, said that “over the years, we’ve established 13 offices and warehouses worldwide, and we’ve also built strong and experienced local teams in key markets.”

“Besides our extensive service network, we’ve developed the X generation inverters, which feature high efficiency, safety, intelligence as well as an elegant design. These advanced PV solutions have brought us additional advantages over other suppliers in the market,” Zhang added.

“We have also built a strong foundation in the Americas. In Brazil, we founded a service centre last year and we have established a partnership with Aldo Solar, the largest distributor in the market,” Zhang added. In the Americas, Growatt has launched intensive marketing campaigns and its sales are going up substantially.

Meanwhile, the company has a presence in Europe for almost 10 years and its products gained popularity in the region for higher efficiency, superior quality and enhanced safety. It further claimed that it is pursuing a global strategy of localization in recent years and has gained strong growth momentum across the world.