The event was earlier scheduled from 19th to 21st April 2018 at the India Expo Mart, Greater Noida, National Capital Region (NCR) of Delhi. 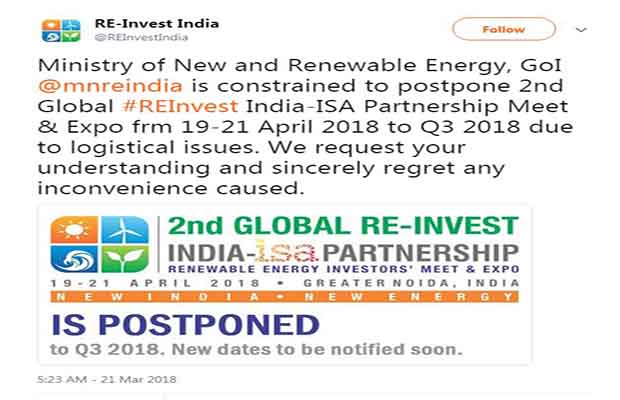 The New and Renewable Energy Ministry (MNRE) has postponed the 2nd Global RE-Invest India-ISA Partnership Renewable Energy Investors Meet & Expo to the third quarter of 2018, on the back of logistical issues.

The event was earlier scheduled from 19th to 21st April 2018 at the India Expo Mart, Greater Noida, National Capital Region (NCR) of Delhi.

The Ministry informed through tweet that, “Ministry of New and Renewable Energy, GoI @mnreindia is constrained to postpone 2nd Global #REInvest India-ISA Partnership Meet & Expo frm 19-21 April 2018 to Q3 2018 due to logistical issues. We request your understanding and sincerely regret any inconvenience caused.”

However, the new dates are yet to be notified by the Ministry, it added.

In December last year, also, the government had postponed the event. It was scheduled from 7th to 9th December 2017.

The RE-Invest series has been envisioned as a global event to deliberate upon strategies for development and deployment of renewables.

It showcases India’s renewable energy potential and the Government’s efforts to scale up capacity to meet the national energy requirement in a socially, economically and ecologically sustainable manner.

As per the government data, this year’s event was expected to be attended by over 5,000 domestic and international delegates and delegations from more than 100 countries.

The 2nd Global RE-Invest was build upon the success of RE-INVEST 2015 and explores the advances made on the ground to achieve India’s target of 175GW renewable energy capacity by 2022.