The Government of India has launched the Phased Manufacturing Programme (PMP) to promote indigenous manufacturing of electric vehicles, its assemblies/sub-assemblies and parts/subparts/inputs of the sub-assemblies thereof.

The Government approved the National Mission on Electric Mobility in 2011 and subsequently the National Electric Mobility Mission Plan 2020 was unveiled in 2013 by the then Prime Minister. As part of the mission, the Department of Heavy Industry notified a scheme namely FAME-India in April 2015 with the aim to incentivise electric vehicle. To promote electric mobility, basic customs duty and GST were reduced and rationalised on electric vehicles in June 2017. Giving an impetus to the launch of electric vehicles in India. 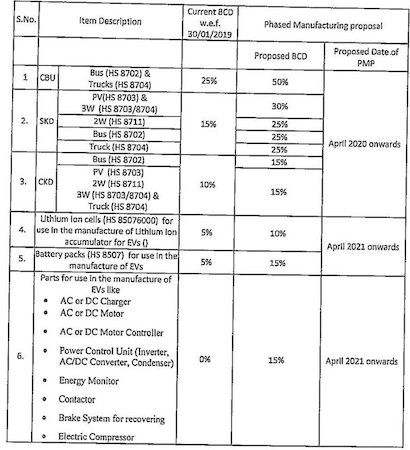 The Department of Heavy Industries and Public Enterprises (DHI) has worked on a list of vehicle types and equipment that are involved in the manufacture of electric vehicles and how the implementation of PMP will bring in a change in the Customs Duties.

Tags: Phased Manufacturing Programme
"Want to be featured here or have news to share? Write to info[at]saurenergy.com