The 342MW Phoenix project will produce power across 10 wind parks in Aragon, Spain, and GE will install 91 onshore wind turbines from its 3MW platform. 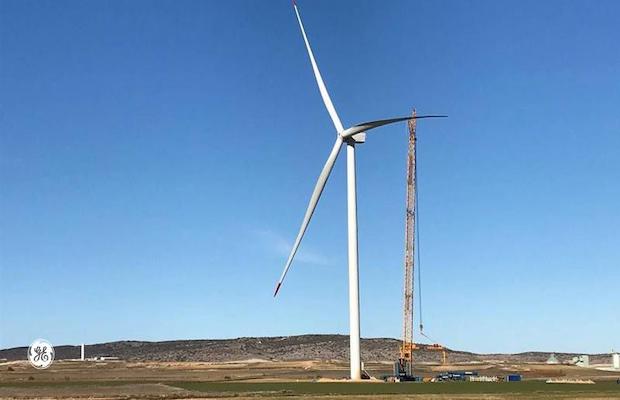 GE Renewable Energy has been selected as the technology provider for the Phoenix onshore wind project in Aragón Spain. The 342 MW project will be developed by Mirova, ENGIE, and Forestalia and will create 10 new wind parks in the Spanish community.

The project will feature 91 onshore wind turbines of GE’s 3MW platform with a 130m rotor diameter and a hub height of 85meters. The units are ideally suited to take advantage of the wind conditions across the five Aragonese regions in the provinces of Zaragoza and Teruel where the parks will be located. The turbines will be produced at GE Renewable Energy’s site in Salzbergen, Germany; the manufacturing of blades will be carried out at its LM Wind Power European facilities.

Peter Wells, Onshore Wind CEO for Europe and SSA at GE Renewable Energy said, “Phoenix marks the continuation of the great work we have done with Forestalia in Goya. We are excited about this significant milestone that validates the reemergence of wind energy in Spain. We will continue building on our local experience to keep powering Aragon and Spain with clean energy.”

Installation of the turbines will commence immediately at the ten new parks, which are being financed by JP Morgan, Santander and Sabadell. Phoenix’s wind parks derive from the renewable energy auction awarded by the Spanish Ministry of Energy in May 2017 and have been declared investments of regional interest by the Government of Aragon.

Recently, GE Renewable Energy was selected by Prowind GmbH to provide three Cypress units for the Elfershausen project in Germany. This marks the first order for GE’s Cypress platform, the company’s largest onshore wind turbine in the field.

Prowind will operate the three Cypress turbines at 4.8MW, with a rotor diameter of 158 m and hub heights of up to 150 and 161 meter. The split blades will be produced by LM Wind Power in Spain and the blade tips will be installed on site. The project is scheduled to be completed by the end of 2019.