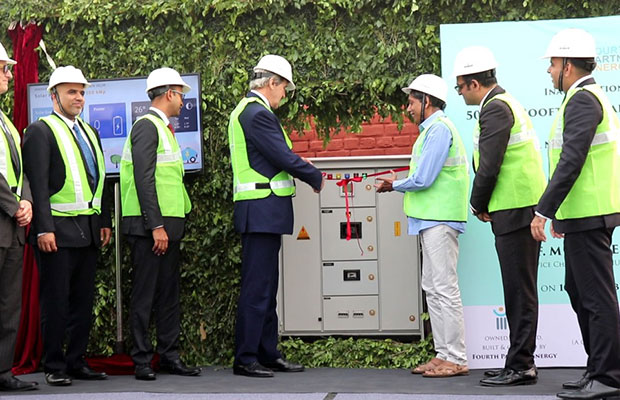 JNU, which implemented the project under Solar Energy Corporation of India’s (SECI) 1000 MWp Grid-Connected Rooftop Solar PV System Scheme for Government Buildings, will enjoy solar power at a flat rate of Rs 3.39 per unit for 25 years.

This will help the University save over 60% in power costs for the equivalent electricity generated.

The project spread across 8 buildings was executed in a record 42 days and will help cut carbon emission by ~700 tons per year which is equivalent to planting nearly 32,000 trees.

Under the SECI scheme, the cost of setting up the solar power plant and its maintenance is undertaken by the developer, Fourth Partner Energy for which state-wise a pre-decided flat rate is charged for a flat tenure of 25 years.

Prof. M. Jagadesh Kumar, Vice-Chancellor of JNU said that “In support of Government of India’s Green initiative of reaching 99,533 MW solar power by 2022, JNU on its part has begun to install solar power grid since 2017 in the campus.”

The Vice-Chancellor further said “JNU in association with Fourth Partner Energy has taken a step forward towards generating green energy in the campus. Further expansion of solar energy generation and conservation has also been planned to realise maximum capacity of solar power generation of 2 MW.”

Brajesh Kumar Sinha, Vice President – Business Development, Fourth Partner Energy said, “JNU is a world -class University, and it was our privilege to be associated with them on this project. We are happy to see their initiative in leading the way for educational institutions to become more environment friendly and promoting sustainability initiatives.”