He expects good response considering the growing confidence in the solar sector’s growth story in India. 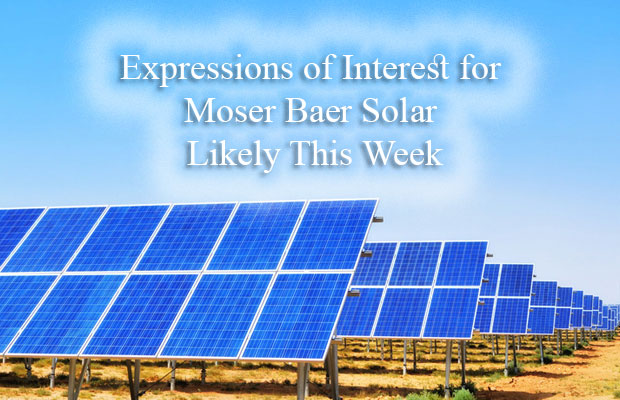 A resolution professional Arvind Garg has said that the expressions of interest (EoI) for the assets of bankrupt Moser Baer Solar are likely to be invited this week.

“We hope to invite expressions of interest this week and we expect a good response considering the good quality assets that Moser Baer Solar has,” Garg said.

Garg further added that he expects good response considering the growing confidence in the solar sector’s growth story in India.

Moser Baer Solar owes over Rs 1,000 crore to a clutch of lenders and the debt turned dud following which it has been referred to the National Company Law Tribunal (NCLT) under the Insolvency and Bankruptcy Code.

The company was dragged to the New Delhi bench of the tribunal by the public sector lender Central Bank of India after it defaulted on over Rs 114 crore loan.

In November last year, the tribunal had allowed the Central Bank’s insolvency plea.

When the case was admitted, the tribunal had appointed Ritu Rastogi as the interim resolution professional and the board was suspended in November 2017.

The company was set up in 2005-07 and soon became a leading name in solar EPC services and solar PV modules. Moser Baer Photo Voltaic is its sister concern.

While the company has crystalline cells capacity of 185 MW, the crystalline modules capacity is 200 MW and thin film modules of 50 MW.

Moser Baer’s financial stress increased following rising China imports. It had sought restructuring of Rs 956 crore of debt in 2012-13 but the recast had failed in October 2016.

However, the company is still strong brand in international markets as its focus has always been on exports supplies to over 38 countries.