The loan will be utilised for financing three solar photovoltaic power projects with a total capacity of 35 MW in the three provinces — Karawa, Mbandaka and Lusambo. 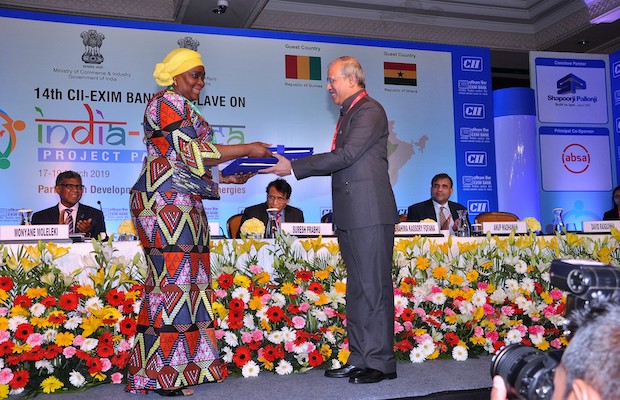 The LOC Agreements to this effect were exchanged between H.E. Ms. Mossi Nyamale Rosette, Ambassador of the Democratic Republic of the Congo to India and Mr. David Rasquinha, Managing Director of Exim Bank during the inaugural session of the 14th CII-Exim Conclave 2019.

With the signing of the above 3 LOC Agreements for USD 83.11 million, Exim Bank, till date, has extended 10 [Ten] Lines of Credit to the Government of the Democratic Republic of the Congo, on behalf of the Government of India, taking the total value of LOCs extended to USD 578.05 million.

Projects covered under the LOCs extended to the Government of the Democratic Republic of the Congo include hydroelectric power projects, power transmission and distribution projects, cement plant, hand pumps, and submersible pumps installation, and solar power projects.

The Bank has now in place 244 Lines of Credit, covering 63 countries in Africa, Asia, Latin America and the CIS, with credit commitments of around USD 23.43 billion, available for financing exports from India. Besides promoting India’s exports, Exim Bank’s LOCs enable demonstration of Indian expertise and project execution capabilities in emerging markets.

In February, the bank announced that it will finance 27 solar power projects worth $1.4 billion spread across 15 countries, according to the Managing Director, David Rasquinha.

“As an agent of Government of India, we are trying to promote solar power projects across the world,” he said while addressing the press on the sidelines of ‘Financing Solar Projects under Government of India’s Lines of Credit (LOCs)’.

The solar projects predominantly located in Africa and South America are identified by the International Solar Alliance and will include grid projects to generate solar power and off-grid projects like rooftop solar and irrigation pumps powered by solar panels.