Etrion closed Q1-21 with an unrestricted cash balance of USD 4.9 million held at the corporate level and a negative working capital of USD 1.6 million, after excluding the Japanese assets-held-for sale.

Consequently in Etrion’s discontinued operations, it produced 11.2 GWh of electricity from the Company’s 57 MW portfolio including 11 solar power plant sites in Japan. It saw a 10.4 percent decrease in production compared with the same period in 2020, due to heavy snowfalls and adverse weather conditions which impacted the overall performance of the solar plants.

However, the construction of the 45 MW Niigata solar project in central Japan is approximately 78 percent complete with an expected connection to the electricity grid by late 2021. This project is on schedule and on budget.

As per the company’s claims, it has not been adversely affected by COVID-19 as far as now. Although, the Group’s Japanese segment generated a net income of USD 0.9 million, in comparison with a net loss of USD 0.4 million for the year 2020. 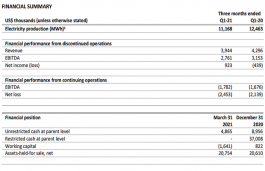 As far as the corporate events are concerned, Etrion has signed the first formal agreements to sell their interests in the Company’s 13.2 MW Komatsu, 24.7 MW Shizukuishi and 9.3 MW Mito operating solar energy projects to a Japanese consortium for an aggregate net purchase price of approximately USD 74.9 million, on March 31, 2021.

While, on April 9, 2021, Etrion announced the agreements to sell the Group’s interests in the 45 MW Niigata solar project under construction for an aggregate net purchase price of around USD 57.7 million. And it expects to close the sale of this project before the end of June 2021.

Speaking of their financial results, Etrion’s CEO, Marco A. Northland commented, “I am pleased with the progress we have made on the negotiations to sell the Japanese assets. While these are very complex transactions, I am confident we will achieve the closing of these transactions before the end of June 2021”.

Tags: Etrion, Financial Results for Q1 2021, net loss, solar company
"Want to be featured here or have news to share? Write to info[at]saurenergy.com